The climate disaster is here, The Guardian, October 2021

Site of publication: The Guardian

The world has already heated up by around 1.2C, on average, since the preindustrial era, pushing humanity beyond almost all historical boundaries. Cranking up the temperature of the entire globe this much within little more than a century is, in fact, extraordinary, with the oceans alone absorbing the heat equivalent of five Hiroshima atomic bombs dropping into the water every second. 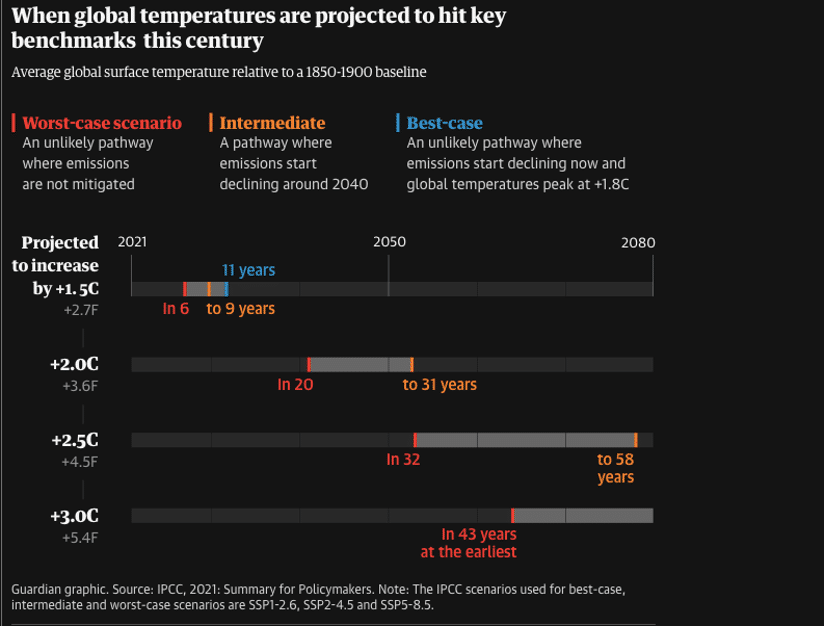 Until now, human civilization has operated within a narrow, stable band of temperature. Through the burning of fossil fuels, we have now unmoored ourselves from our past, as if we have transplanted ourselves onto another planet. The last time it was hotter than now was at least 125,000 years ago, while the atmosphere has more heat-trapping carbon dioxide in it than any time in the past two million years, perhaps more.

Since 1970, the Earth’s temperature has raced upwards faster than in any comparable period. The oceans have heated up at a rate not seen in at least 11,000 years. “We are conducting an unprecedented experiment with our planet,” said Hayhoe. “The temperature has only moved a few tenths of a degree for us until now, just small wiggles in the road. But now we are hitting a curve we’ve never seen before.”

No one is entirely sure how this horrifying experiment will end but humans like defined goals and so, in the 2015 Paris climate agreement, nearly 200 countries agreed to limit the global temperature rise to “well below” 2C, with an aspirational goal to keep it to 1.5C. The latter target was fought for by smaller, poorer nations, aware that an existential threat of unlivable heatwaves, floods and drought hinged upon this ostensibly small increment. “The difference between 1.5C and 2C is a death sentence for the Maldives,” said Ibrahim Mohamed Solih, president of the country, to world leaders at the United Nations in September.

This year has provided bitter evidence that even current levels of warming are disastrous, with astounding floods in Germany and China, Hades-like fires from Canada to California to Greece and rain, rather than snow, falling for the first time at the summit of a rapidly melting Greenland. “No amount of global warming can be considered safe and people are already dying from climate change,” said Amanda Maycock, an expert in climate dynamics at the University of Leeds.

For humans, a comfortably livable planet starts to spiral away the more it heats up. At 1.5C, about 14% of the world’s population will be hit by severe heatwaves once every five years. with this number jumping to more than a third of the global population at 2C.

Beyond 1.5C, the heat in tropical regions of the world will push societies to the limits, with stifling humidity preventing sweat from evaporating and making it difficult for people to cool down. Extreme heatwaves could make parts of the Middle East too hot for humans to endure, scientists have found, with rising temperatures also posing enormous risks for China and India.

For humans, a comfortably livable planet starts to spiral away the more it heats up. At 1.5C, about 14% of the world’s population will be hit by severe heatwaves once every five years. with this number jumping to more than a third of the global population at 2C

A severe heatwave historically expected once a decade will happen every other year at 2C. “Something our great-grandparents maybe experienced once a lifetime will become a regular event,” said Rogelj. Globally, an extra 4.9 million people will die each year from extreme heat should the average temperature race beyond this point, scientists have estimated.

Earth’s hotter climate is causing the atmosphere to hold more water, then releasing the water in the form of extreme precipitation events

Across the planet, people are set to be strafed by cascading storms, heatwaves, flooding and drought. Around 216 million people, mostly from developing countries, will be forced to flee these impacts by 2050 unless radical action is taken, the World Bank has estimated. As much as $23tn is on track to be wiped from the global economy, potentially upending many more.

Some of the most dire impacts revolve around water – both the lack of it and inundation by it. Enormous floods, often fueled by abnormally heavy rainfall, have become a regular occurrence recently, not only in Germany and China but also from the US, where the Mississippi River spent most of 2019 in a state of flood, to the UK, which was hit by floods in 2020 after storms delivered the equivalent of one month of rain in 48 hours, to Sudan, where flooding wiped out more than 110,000 homes last year.

Earth’s hotter atmosphere soaks up water from the earth, drying out trees and tinder that amplify the severity of wildfires

Virtually all of North America and Europe will be at heightened risk of wildfires at 3C of heating, with places like California already stuck in a debilitating cycle of “heat, drought and fire”, according to scientists. The magnitude of the disastrous “Black Summer” bushfire season in Australia in 2019-20 will be four times more likely to reoccur at 2C of heating, and will be fairly commonplace at 3C.

A disquieting unknown for climate scientists is the knock-on impacts as epochal norms continue to fall. Record wildfires in California last year, for example, resulted in a million children missing a significant amount of time in school. What if permafrost melting or flooding cuts off critical roads used by supply chains? What if storms knock out the world’s leading computer chip factory? What happens once half of the world is exposed to disease-carrying mosquitos?

Unpredictable weather, like too much or too little rainfall, decreases the quantity and quality of crop yields.

There are few less pleasant impacts in life than famine and the climate crisis is beginning to take a toll on food production. In August, the UN said that Madagascar was on the brink of the world’s first “climate change famine”, with tens of thousands of people at risk following four years with barely any rain. Globally, extreme crop drought events that previously occurred once a decade on average will more than double in their frequency at 2C of temperature rise.

Heat the world a bit more than this and a third of all the world’s food production will be at risk by the end of the century as crops start to wilt and fail in the heat.

Every decision – every oil drilling lease, every acre of the Amazon rainforest torched for livestock pasture, every new gas-guzzling SUV that rolls onto the road – will decide how far we tumble down the hill. In Glasgow, governments will be challenged to show they will fight every fraction of temperature rise, or else, in the words of Greta Thunberg, this pivotal gathering is at risk of being dismissed as “blah, blah, blah”

Despite the rapid advance of renewable energy and, more recently, electric vehicles, countries still remain umbilically connected to fossil fuels, subsidizing oil, coal and gas to the tune of around $11m every single minute. The air pollution alone from burning these fuels kills nearly nine million people each year globally. Decades of time has been squandered – US president Lyndon Johnson was warned of the climate crisis by scientists when Joe Biden was still in college and yet industry denial and government inertia means the world is set for a 2.7C increase in temperature this century, even if all emissions reduction pledges are met.

By the end of this year the world will have burned through 86% of the carbon “budget” that would allow us just a coin flip’s chance of staying below 1.5C. The Glasgow COP talks will somehow have to bridge this yawning gap, with scientists warning the world will have to cut emissions in half this decade before zeroing them out by 2050.

Every decision – every oil drilling lease, every acre of the Amazon rainforest torched for livestock pasture, every new gas-guzzling SUV that rolls onto the road – will decide how far we tumble down the hill. In Glasgow, governments will be challenged to show they will fight every fraction of temperature rise, or else, in the words of Greta Thunberg, this pivotal gathering is at risk of being dismissed as “blah, blah, blah”.

“We’ve run down the clock but it’s never too late,” said Rogelj. “1.7C is better than 1.9C which is better than 3C. Cutting emissions tomorrow is better than the day after, because we can always avoid worse happening. The action is far too slow at the moment, but we can still act.”