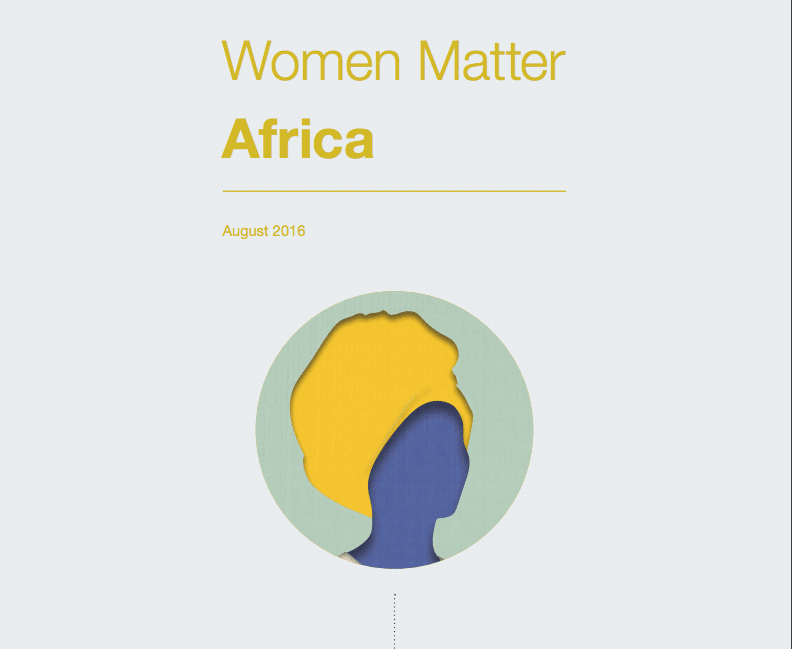 Why did we choose this document?

This report evaluates the causes and consequences of gender disparities in the work place, incorporating both the public and the private sector. It comprehensively examines female representation in corporate management positions, executive boards, parliament, and governmental cabinets across the African continent. It also analyses the barriers that prevent women from climbing the corporate latter and securing politically significant positions in government.

Research on this topic is critical because achieving gender equality is crucial to the sustainable development and health of businesses and governing bodies. Time and time again, studies have confirmed that giving women more decision-making power and providing women with more equitable opportunities for career advancement is essential to the overall health of any organization, government, or society at large. This report explains that increasing the number of women in leadership positions helps businesses and governing bodies gain higher financial returns, improve their risk management capabilities, and ameliorate their overall decision-making processes.

Furthermore, this publication emphasizes how gender equality cannot be solely based on numbers, and how true gender diversity reform needs to be rooted in accountability and collective behavioral changes. Women in leadership say that they had to be tough and resilient to achieve their current status, and that they need to work continuously harder than men in order to get recognition for their work and influence their surroundings. This demonstrates that hiring more women is not enough to transform the gender dynamics in the work place—corporations and governing bodies need to be accountable for their collective attitudes towards women and actively work to disintegrate barriers blocking women from rising to leadership positions.

Lastly, this report draws its analysis from a dynamic set of sources, including interviews with 35 African women in leadership roles, surveys conducted at 55 corporations, data on female cabinet and parliamentary appointments, financial performance analyses of 210 publicly traded African companies, and peer-reviewed publications regarding gender disparities in the work place. This compelling mix of sources gives a well-rounded, complete perspective on gender diversity in African leadership.

What lessons for the countries of the WATHI zone?

African countries have made a considerable amount of progress regarding women in leadership over the past decades. African corporations have more women in leadership roles than the worldwide average, and the number of women parliamentarians in African governments has doubled over the past 15 years. However, the vast majority of African governments and companies have not achieved anything close to gender equality, and therefore are missing out the lucrative benefits provided by gender diverse leadership.

To highlight just one of these benefits, African companies in the top quartile in terms of number of women on their executive boards have an earnings before interest and tax (EBIT) margin that is on average a fifth higher than the industry average. This demonstrates how companies with more women in leadership positions are more financially successful, therefore African companies would benefit from creating a more gender-inclusive work environment.

The countries in the WATHI zone can gain a lot from these findings, because West Africa is lagging significantly behind the continental average for women in leadership roles. Women only represent 11% of people on corporate executive boards in West Africa, compared with an average of 14% across the continent. Additionally, West Africa has the lowest female parliamentary representation in the continent, with just 16% of parliamentary seats filled by women.

Lastly, 61% of women who hold governmental cabinet positions in West Africa lead social-welfare portfolios that garner limited political influence, rather than leading ministries such as treasury, infrastructure, defense, and foreign affairs with more political influence. This demonstrates that, even when West African women do obtain a leadership role in government, they are not given responsibility over politically significant and revenue-generating functions. Therefore, it can be argued that even increasing the number of women in West African government leadership does not necessarily lead to a fair distribution of power.

SELECTED EXCERPTS FROM THE DOCUMENT

Women only represent 11% of people on corporate executive boards in West Africa, compared with an average of 14% across the continent

Senior leaders should develop and enforce a cohesive gender diversity transformation strategy, own the communication about this transformation, monitor progress and lead the change

African Women in the Private Sector

In the 55 companies in our survey, women make up 45 percent of the workforce but receive just 36 percent of promotions

Numbers Do Not Necessarily Equal Influence

More than 50 percent of African women cabinet ministers are in charge of social welfare portfolios, while only 30 percent lead the ministries for treasury, infrastructure, defense, and foreign affairs – arguably departments with more political influence

Getting Serious about Gender Diversity

Our Women Matter reports have highlighted a range of unconscious biases – sometimes held by women as well as men – that are obstacles to women’s advancement. The performance evaluation bias, for example, describes how men tend to be evaluated more on their future potential, and women more on what they have achieved to date. Women also tend to be given less credit for their success than men, and to be criticized more for any failure. The resulting lack of confidence means women are less likely to put themselves up for promotion. There is also a maternal bias: motherhood triggers assumptions that women are less committed to their careers. As a result, they tend to be held to higher standards and offered fewer leadership opportunities