On Monday, U.S. Secretary of State Antony Blinken introduced the Biden administration’s much-awaited strategy for Africa. Speaking in South Africa, during his second trip to the continent in less than a year, Blinken outlined the policy against a backdrop of the pandemic, the war in Ukraine, and a global economic slowdown. Although somewhat comparable to recently launched initiatives for Latin America and the Indo-Pacific, the Africa strategy stands out as an uniquely elaborate effort at a moment when the administration is working to revamp U.S. relations across the globe.

At its core, the strategy articulates a vision for a twenty-first century U.S.-African partnership motivated by discernible global shifts. One motivation is the realization of Africa’s importance to U.S. global priorities, such as the continent’s rapidly growing population, one of the world’s largest trading blocs, significant natural resources endowments, and a sizable voting bloc in the United Nations. Another rationale is U.S. positioning for the great power competition with China and Russia for influence in Africa. The document often cites Chinese “harmful activities” side-by-side with Russia’s use of “disinformation . . . to undercut Africans’ principled opposition to Russia’s further invasion of Ukraine,” in reference to the nonaligned stance by some African countries at the UN. These activities are contrasted with the promise of “high standards, values-driven and transparent” initiatives by the United States and allies. 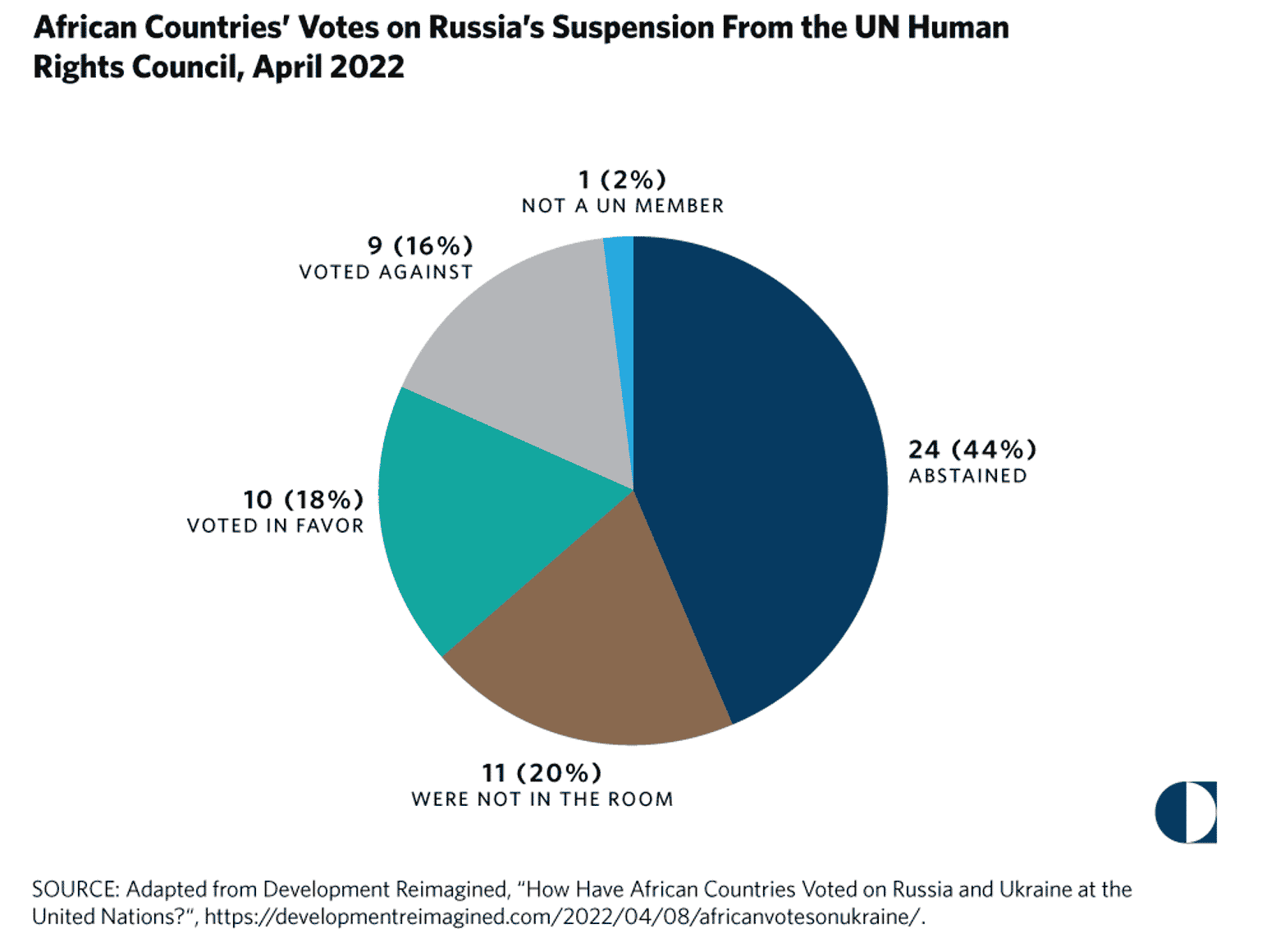 The proposal outlines four strategic objectives, including climate adaptation and post-pandemic economic recovery efforts alongside long-standing goals of transparent governance, democracy, and security priorities. To achieve these objectives, the partnership will focus on expanded efforts and new instruments to reset the U.S.-Africa relationship by engaging and bolstering civil society and America’s African diaspora, as well as leveraging the private sector and rebalancing toward urban hubs.

The document does deliver with new approaches in four promising ways.

First, the framing of the strategy as a “U.S.-African partnership” is new language that marks a departure from initiatives by previous U.S. administrations. The conspicuous emphasis on “listening” and African agency is a testament to the extensive consultations that preceded Blinken’s announcement. This commitment should address the recurring accusation that U.S. foreign policy officials rarely empathize with Africans policymakers’ legitimate economic, political, and security concerns.

The most exciting aspect of the strategy, by far, is its articulation of Africa’s climate challenge in a way that acknowledges the continent’s concerns and realities

The strategy also commits to working more closely with African partners, especially the African Union, to address lingering challenges and “will direct unilateral capability only where lawful and where the threat is acute.” One example where this could play out is the conflict in Ethiopia, especially as it relates to sanctions, suspension of trade privileges under the African Growth and Opportunity Act (AGOA), and how closely Washington works with conflict resolution mechanisms at the African Union and elsewhere.

The most exciting aspect of the strategy, by far, is its articulation of Africa’s climate challenge in a way that acknowledges the continent’s concerns and realities. The strategy recognizes that Africa is responsible for a tiny fraction of global emissions, and it aims to balance climate and development goals by promising to work closely with African countries to determine how best to meet their specific energy needs through various technologies including “renewable energy as well as gas-to-power infrastructure.”

Another discernible policy shift is the promise of economic partnerships in areas that speak to both African economic priorities and U.S. strengths. It aims to support an equitable post-pandemic recovery in the short term and to build more stable and inclusive economies through increased trade, investment, and job creation.

Finally, the strategy hints at dynamic ways the United States can mobilize private capital. It cites the example of how the San Francisco Employees’ Retirement System approved a $100 million investment into power projects in Africa and other emerging markets in 2017. Such innovation could be a model for tapping into new sources of financing for infrastructure projects. Africa needs at least $100 billion per annum to plug its infrastructure finance deficit and another $50 billion to invest in climate adaptation, according to estimates by the African Development Bank.

Elements of the status quo

But the continuities of decades of U.S. policy on Africa are conspicuous in the strategy. The document states as much: that it “recasts traditional U.S. priorities” in a way that reiterates existing approaches to promoting transparent governance and human rights, addressing democratic backsliding, and maintaining security. However, the strategy has at least three areas where it should have gone further than the status quo.

First, it could have led the way in casting aside a perplexing demarcation that many Africans themselves do not subscribe to. It is surprising that a strategy that emphasizes its newness continues with the perplexing use of “sub-Saharan” and “North” Africa, dividing the fifty-five nation-states of the African continent into two groups. Though the strategy’s framing reflects a U.S. government bureaucracy that largely divides Africa in this way, in so doing, it replicates the myriad problems with this delineation: Why lump both Mauritania and Botswana in “sub-Sahara” when the former has more sociocultural similarities with Algeria and Morocco than with any country in southern Africa? Where does Djibouti belong? The strategy could have pushed the United States toward taking a more dynamic geographical treatment of Africa by employing a continentwide lens on trade, a sub-regional lens— central, east, north, west—on intra-African migration and transport infrastructure, and a country-level focus on elections and energy projects. 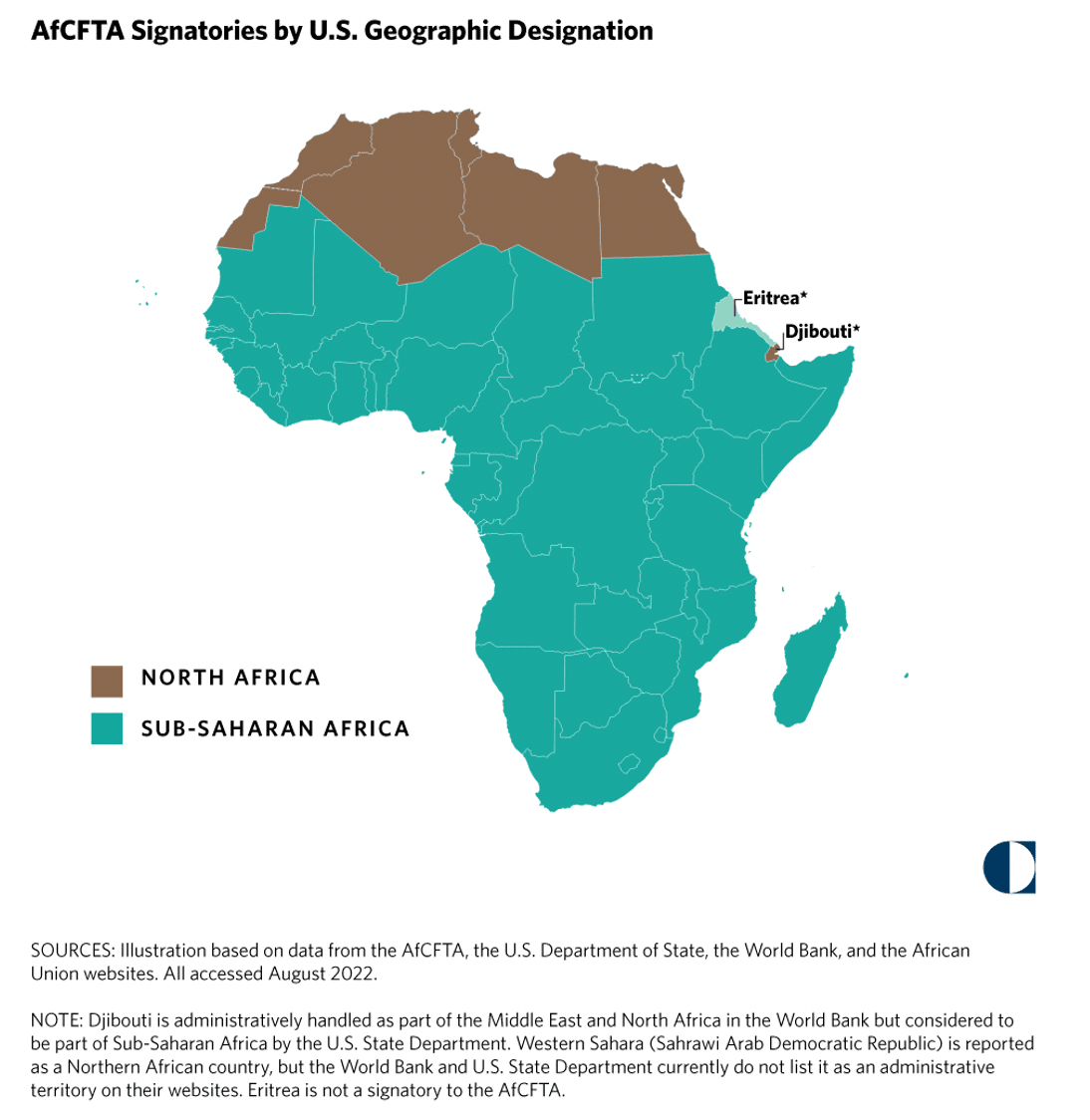 Second, the strategy could have laid out a way for the United States to push beyond its traditional emphasis in “civil society” partners: beyond well-credentialed activists and journalists to include other influential nongovernmental actors typically overlooked by U.S. foreign policy programming. For example, African small and medium-sized business associations—especially manufacturers associations, transport unions, market women associations, tech startups, and others—have thousands, if not millions, of members. A game-changing approach to bolstering civil society on the continent would employ a more expanded definition to include these membership organizations that are politically influential, as well as academics in universities and research organizations who play a role in policy debates.

Another discernible policy shift is the promise of economic partnerships in areas that speak to both African economic priorities and U.S. strengths. It aims to support an equitable post-pandemic recovery in the short term and to build more stable and inclusive economies through increased trade, investment, and job creation

Now that the strategy is out, African countries, U.S. allies and development partners, and other stakeholders will be on the lookout for how this vision will be implemented. Achieving intergovernmental coherence among initiatives such as Prosper Africa and Power Africa across the U.S. government will be a crucial indicator of success. How the implementation of the strategy intersects with U.S. congressional initiatives on Africa, including existing legislation such as AGOA and the Electrify Africa Act, will help address questions that African partners may have on U.S. policy continuity. And most importantly, how much funding the Biden administration allocates to the strategy’s implementation will be the main determinant of success. The Biden administration has several opportunities to score quick wins over the next few months, such as clearing nonimmigrant visa backlogs and rallying European allies toward more equitable global climate policies for Africa at the upcoming COP27 summit in Egypt. These changes in areas that matter to African countries will be the surest way to build the foundation for a twenty-first century partnership.