Accueil Wathinote élection Ghana situation des droits humains “No Choice But To Deny Who I Am” Violence And Discrimination Against LGBT People In Ghana, Humans Rights Watch 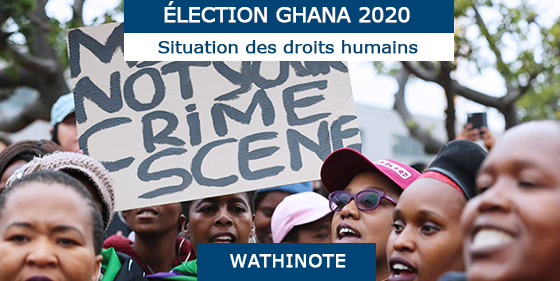 “No Choice But To Deny Who I Am” Violence And Discrimination Against LGBT People In Ghana, Humans Rights Watch

Ghana has a mixed record on its treatment of lesbian, gay, bisexual and transgender (LGBT) people. It criminalizes “unnatural carnal knowledge” in section 104 (1) (b) of its Criminal Offences Act, which the authorities interpret as “penile penetration of anything other than a vagina.” However, the law is a colonial legacy that is rarely, if ever, enforced, and unlike several of its neighbors, Ghana has not taken steps in recent years to stiffen penalties against consensual same-sex conduct or to expressly criminalize sexual relations between women.

At least two government agencies, the Ghana Police Force and the Commission on Human Rights and Administrative Justice (CHRAJ), have reached out to LGBT people and taken proactive steps, including through providing human rights training workshops to help ensure their protection. Nevertheless, LGBT people are very frequently victims of physical violence and psychological abuse, extortion and discrimination in many different aspects of daily life, because of their sexual orientation and gender identity.

This report is based on interviews conducted between December 2016 and February 2017 in Accra (Ghana’s capital), Tamale (the capital of the northern region of Ghana), Kumasi (the capital of Ashanti region in southern Ghana) and Cape Coast (capital of Central region in southern Ghana) with 114 Ghanaians who self-identify as LGBT. It documents the human rights impact of section 104(1)(b) of the 1960 Criminal Offences Act (Act 29) on the lives of LGBT people in Ghana.

Despite the rare, if any, prosecutions under this provision, Human Rights Watch found that the criminalization of adult consensual same-sex conduct contributes to a climate in which violence and discrimination against LGBT people is common. The retention of section 104(1)(b) – commonly referred to as the anti-gay law – is often seen as tacit state approval of discrimination, and even violence, on the basis of real or imputed sexual orientation and gender identity. The law also contributes to a social environment in which there is pervasive violence against lesbian, bisexual and gender non-conforming women in the home and LGBT people more generally in communities where they live.

This report documents how dozens of LGBT people have, on numerous occasions, been attacked both by mobs and members of their own families, subjected to sexual assault, intimidation and extortion. For instance, in August 2015 in Nima, Accra, a young man was allegedly brutally assaulted by members of a vigilante group known as Safety Empire simply because they suspected he was gay.

Also, several men described being severely beaten by mobs of young men—often after being lured into compromising situations and blackmailed on social media. In May 2016 in a village outside Kumasi in the Ashanti region, the mother of a young woman organized a mob to beat up her daughter and another woman because she suspected they were lesbians and in a same-sex relationship. The two young women were forced to flee the village.

Lesbian, gay, bisexual and transgender Ghanaians interviewed by Human Rights Watch said that the combination of the criminalization of adult consensual same-sex conduct and the profoundly religious and socially conservative Ghanaian context has an insidious effect on their individual self-expression. All the interviewees said that they either felt they had little choice but to adopt self-censoring behavior, or worse, deny their sexual orientation or gender identity to avoid suspicion by family members and the communities in which they live.

Numerous interviewees told Human Rights Watch that in certain instances, such suspicion has led to violence, extortion and arrests. Lesbian, bisexual women and transgender men are frequently victims of domestic violence. While Pearl’s story of being subjected to a mob assault for being a lesbian is horrific, violence against this group of women in Ghana often takes place in the privacy of their own homes–the place where they ought to feel the most secure.

The report details the ways in which the intersection of gender and sexual orientation renders gender nonconforming women particularly vulnerable to domestic violence. While recognizing that the legal framework affects the lives of LGBT individuals generally, it is imperative to highlight  the abuse that lesbian and bisexual women are subjected to in the private sphere, particularly by family members who exercise domination and control over women’s lives, bodies and sexuality.

Many LGBT Ghanaians told Human Rights Watch that their lives have been torn apart because of the stigma associated with homosexuality; the fear of violence perpetrated by family members and others in the community and homelessness, should their sexual orientation be disclosed. The negative public discourse about LGBT people, who are  referred to in derogatory terms in public spaces, combined with the risk of physical violence has severe psychological implications. Many interviewees said they constantly struggle with the stress associated with hiding their sexuality, thus living double lives, to stay safe. Facing the risk of family rejection, many succumb to the pressure to marry. Others, ostracized from their families, find themselves with few economic options, leading some to rely on sex work as a means of survival.

To the Inspector General of Police: Ghana Police Services

To the Commission on Human Rights and Administrative Justice