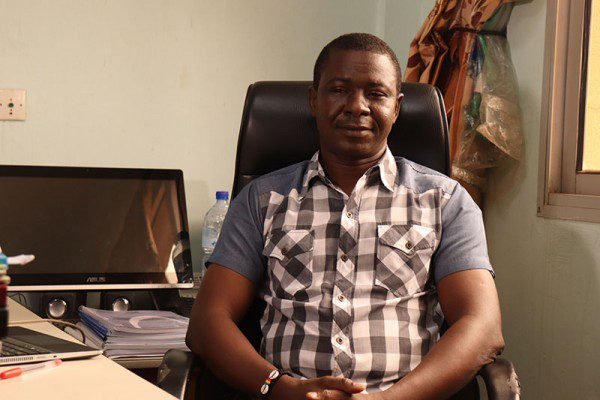 English
Presentation of the Institute of Social Sciences (INSS)

The Institute of Social Sciences (INSS) is a specialized center of the Burkinnabè state. It is the state reference center in more than 20 research fields. These include anthropology, Egyptology, gender and management, geography, history, linguistics, musicology, sociology, political science, philosophy, etc…

The essential mission of the INSS is to put scientific knowledge of social and human realities at the center of the requirements for national development. The institute organizes work in fundamental and applied research, taking into account the protection of national heritage and cultural diverisity.

The INSS has set itself a series of objectives which can be summarized by: design, strengthen, enhance, and support. First, the INSS aims to design and conduct research activities in the social sciences and humanities, to support sectoral development policies and programs. Next, strengthen and energize the institutional and governance capacities and the operational capacities of the departments, and execute research projects and programs. Finally, exploit the results of research in the social sciences, humanities, inventions, and innovations.

The INSS makes at least seventy (70) publications a year. All of the studies and research results of the INSS are used to fuel the production of national collective intelligence. Finally, the INSS is the main structure working on changes linked to national languages and culture.

The INSS covers all 45 provinces of Burkina Faso, but only has one office based in Ouagadougou. This creates a considerable distance between the subjects of study (societies, ethnicities, etc.) and the institute. This is how societal changes escape the study of the Institute of Social Sciences.

Excerpts from the Interview

We are a public institute dedicated to research on behalf of the state. So, there are allocated budgets, but we must admit they are not sufficient. Our structure benefits from European Union funding on topical issues, as well as funding from certain diplomatic services, in particular the Swedish Embassy, which supports research programs and activities. There are also competitive calls for projects to which we apply. As an example, I am currently coordinating a Great Green Wall program with funding from the Total Foundation.

There are also other foundations like Light for World who support a research program on inclusive education. The aim of this program is to integrate people living with disabilities into the traditional education system, taking into account aspects of teacher training, etc. Many things are done with the support of the private sector and foundations, which support us by granting post-doctoral scholarships to students who have just finished their theses and who wish to conduct post-doctoral studies.

The Impact of Research Results

A concern arises: to date, we cannot measure the real impact of research results on populations. Because there is not a systematic evaluation which aims to determine the impact produced by a result and which are the very precise measures to be taken. Also, users of our research results do not explicitly say that it was our results that influenced them.

The books we publish are sometimes used in the education system to flesh out textbooks on aspects related to the history of Burkina or Africa. This can be seen as an impact.

We are also working on the organization of health systems; how to better take into account the provider-patient relationship. As researchers, our goal is to take a critical look at this; and this has an impact on the caregiver-caregiver relationship. Human aspects are taken into account now. The patient’s opinion is now taken into account, because the results show that the patient complains because he is not listened to very well, the reception in health facilities does not take into account his needs to offer him the care he’s asking for. All these elements are effectively transferred into health policy and this has an impact on the way to better manage health systems.

Speaking of inclusive education, two provinces, Manga and Kaya, benefit from the support of certain educational structures. There are adaptations that are made because indeed, there are shortcomings that are mentioned.

Regarding the linguistic aspect, it is supported by the Department of Linguistics and National Language via language transcriptions, translation of textbooks, etc. All of this has an impact because our specialists are invited to translate official documents into local languages.

It is an expertise that allows knowledge to be transmitted to a population that does not speak French. These are impacts on the population. But there remains the establishment of a systematic evaluation approach to measure results and impacts. I believe this is a concern of the National Center for Scientific and Technological Research (CNRST).

Researchers have often locked themselves in their laboratories or offices and produced work without popularizing it with decision-makers. It must be recognized that this barrier is being removed with the new generation of researchers. They gradually understand the need to enhance research and make it useful. It is important that habits change. This is all the more complicated, since there is also a concern for career promotion which requires researchers to publish articles in accordance with scientific standards, which, in the end, are disinterested.

We must go towards the perspective of applied research, “action research.” The solution could come from the creation of promotion and career promotion structures for researchers. The adoption of such a concept would lead researchers to carry out applied, useful and applicable research activities.

It must also be said that researchers are less used in the development process. They are only called to the rescue or when a development program is not working, when researchers should be involved initially in the design of development programs and projects, by defining the parameters to be taken into account and the dimensions to consider, identifying, and evaluating the resources necessary to achieve the objectives set. This is one of the difficulties which is beginning to be more or less corrected.

A big challenge to take up is to set up an observatory or several observatories of social dynamics. An observatory will allow people to be systematically alerted. Conceptually, it must be robust and there must be a certain number of indicators giving effective directives on a social fact.

Another aspect is that we have a serious human resource deficit. We do not have enough skilled workforce. However, in terms of capacity, we have competent people. However, we are under-staffed for very large-scale research, which affects the timing of the transmission of deliverables.

In the history of human resources in Burkina, there has been a gap between the generation of people trained just after independence in the 1960s and the current generation. There has been almost a decade in which people have not been trained. The current challenge is that there are many retirements and very few people trained for the next generation. This is a real observation and we are trying to remedy it at the national level.

To this end, a national recruitment plan has been adopted to recruit around ten people per year. Despite this, there are positions that are not yet filled. We express our needs at the level of the Ministry, which launches calls for candidates, but there is a lack of suitable profiles on the market. The observation is that there are not enough people trained for research. I do not doubt the skills of the few people currently on the job, but we are working to have a mass of researchers who come to support us. And this must be done as soon as possible, so that there is a transfer of skills.

The Involvement of the Private Sector in Research

First of all, I don’t think there is a private structure that has raised enough funds over several years that allow it to fund research teams. It’s a structural fact. Secondly, the private structures of the place are not interested in research. They are concerned with development issues. They provide funding for development projects (installation of plantations, social projects, etc.).

Message to Researchers, the State, and Populations

As researchers, we must be able to fully assume our role. This is a call that I make to all researchers. Since we have a certain amount of intellectual baggage, theoretical resources, empirical experience, that allows us to comment on social dynamics.

This is therefore the responsibility of the public sector. Regarding the population, it must be said that, although we are researchers, we have a civic duty. The population must collaborate with researchers by bringing ideas and proposals that researchers could help them with.

Anthropology researcher, holder of a Doctorate from the Free University of Brussels since 2011, he is a human rights trainer and member of the Interdisciplinary Health Research Laboratory (LARISS), as well as of the Training and Research Unit in human sciences (UFR/SH) of the Sociology department at Ouaga University I.

He teaches at Nazi Boni University (on ethnoecology and environmental management), at Joseph KI-Zerbo University (on popular representations of the disease) and at the Catholic University of West Africa – Bobo (on systems of social representations). Doctor Roger Zerbo won the prize for excellence in humanities and social sciences.