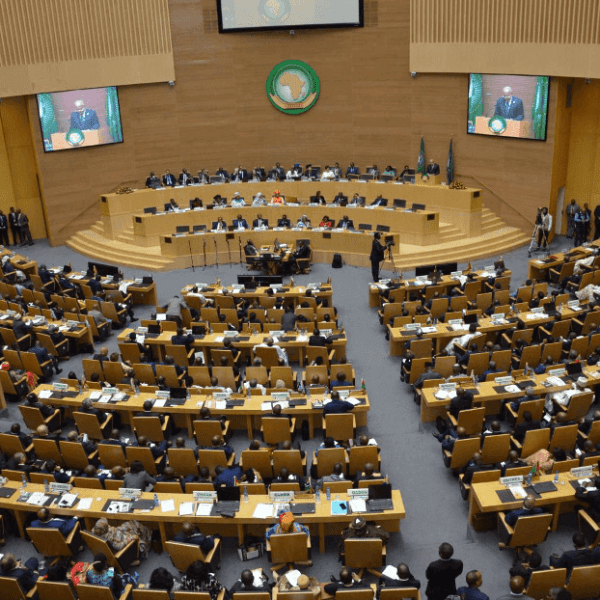 The African Union needs the power of the people

Engaging African publics can be key to protecting African regional projects from fluctuating political will/Can a mandate from Africans protect the AU’s objectives?

The African Union has developed and launched many plans and charters aimed at solving some of the perennial problems facing the continent’s development. Some of these plans have however experienced limited implementation success, partly due to their overdependence on the political will of national governments. Securing the buy-in of African publics – citizens of African countries – to these projects may be one way to improve success rates.

The range of plans and charters the African Union has come up with cover several issues from the protection of human rights to infrastructure development. There have been regional integration plans to facilitate free movement within the continent and reduce the cost of doing so. Addressing the perennial challenge of African development has also been at the centre of several AU-level plans. However, African countries, economies and people remain poorly connected; and African development still seems to be a long way off. Inconsistent implementation due to fluctuating political will is one of the main challenges facing the AU.

As one official from the African Union put it, African leaders show support and enthusiasm for regional projects when they convene in one location, but “stop answering their phones” after they get back to their home countries.

The creation of the Economic, Social and Cultural Council (ECOSOCC) and the Directorate of Citizens and Diaspora (CIDO) was intended to increase the participation of civil society as well as Africans at the grass-root into decision making but this objective has not been achieved. The Pan-African Parliament was also envisioned to play a similar role, but it is hardly considered a success.

As one official from the African Union put it, African leaders show support and enthusiasm for regional projects when they convene in one location, but “stop answering their phones” after they get back to their home countries

There have been other attempts to reform the African Union. However, embedded in these reforms is the protection of the sovereignty of member states, reflecting the continued resistance towards delegating authority to the African Union. It could be for this reason, among others, that the African Union’s “crisis of implementation” as described by Rwanda’s President Paul Kagame, continues.

This raises the question of whether the African Union can instead benefit from the “power of the people”. However, a bottom-up approach to designing and implementing regional projects will require close engagement with African publics.

The poor awareness among African publics of the African Union’s mandate and activities is a stumbling block for regional integration. A 2015 Afrobarometer citizens poll found that of the 36 African countries surveyed, 42% said they had little information on the African Union or that it didn’t help their countries at all. African publics that support and believe in regional projects can apply pressure on their national governments to uphold their obligations to these projects.

The absence of public demand leaves the AU with very few options when negotiations or implementation plans face challenges. There are two current examples of this.

The AU’s Agenda 2063 for African prosperity includes the pillars of trade and mobility integration. However, although the African Continental Free Trade Area (AfCFTA) agreement experienced strong political will in its signing and ratification, its implementation has now gotten stuck at the negotiation level. On the other hand, the Protocol for the Free Movement of Persons (FMP) has not even been able to garner the minimum number of ratifications to come into force.

The poor awareness among African publics of the African Union’s mandate and activities is a stumbling block for regional integration. A 2015 Afrobarometer citizens poll found that of the 36 African countries surveyed, 42% said they had little information on the African Union or that it didn’t help their countries at all

Funding challenges faced by the African Union is another instance of this issue, as the unwillingness of African heads of states to commit sufficient resources to the organisation forces it to depend on foreign donors.

Securing the buy-in of African publics to regional agendas may be one of the missing links in regional integration projects. A failure to do so can have broad-ranging consequences that not only includes the vulnerability of the African Union’s projects to the whims of the political elite but also implies the possibility of public mobilisation against these projects for personal political interests. An illustration of this is the growing xenophobic tendencies in some African countries that are being exacerbated by some politicians and may threaten regional aspirations.

There are several ways for the AU to sell regional projects to Africans. One of these is the use of popular culture products – music, film and other art forms – that most segments of the public are drawn to. Collaborations between the AU and the creative industries can help translate regional aspirations into stories that effectively communicate messages.

Working more with local institutions such as universities, media houses and civil society can help bring regional aspirations to the grassroots. Social media provides a less costly platform for disseminating communication campaigns and is currently under-utilised by African regional entities. There are some attempts at leveraging traditional and social media that should be strengthened and emulated.

A bottom-up approach requires the African Union to be accountable and responsive to African publics. There are real implications of this, especially given the tensions around the AU’s inconsistent positions on power grabs and unconstitutional power transitions.

Key to securing public support for African regional projects is ensuring that these projects are driven by the needs of Africans. For example, a people-centred approach to the free movement protocol may start with addressing mobility needs of students and workers through academic and economic exchanges that are grassroots-based and not dependent on the FMP. These exchanges can also be extended to the public service, to give African public officials a deeper understanding of their respective challenges.

Regional integration is difficult but important. Maintaining the status quo can mean Africa’s developmental aspirations will not be achieved within the expected timeframes. It is time for more innovative ideas to address the never-ending clash between the sovereignty of African countries and the attainment of collective objectives.

Teniola Tayo is a policy advisor passionate about Nigeria and Africa’s development. She works at the intersection of security, trade and development with current and previous consultancy roles with the Institute for Security Studies, the Office of the Vice President (Nigeria), the United Nations Development Programme and the Inter-American Development Bank. She has also worked as a Senior Analyst with Nextier Advisory, and as a Senior Legislative Aide with the Nigerian Senate where she supported the Office of the Senate President with policy research.

She has a Master’s degree in Development Management from the London School of Economics (LSE). She is a Chevening Scholar, a Fellow with the LSE Programme for African Leadership (PfAL) and the European University Institute’s Young African Leaders Programme (YALP). She also has a passion for the arts and is the Deputy Director of the Abuja Literary Society. She has written and published several policy articles on varying topics, some of which can be found here: https://aloinett.medium.com