Accueil Wathinotes débat alimentation The state of food security and nutrition in the world, in the World 2020, Transforming food systems for affordable healthy diets, FAO, IFAD, UNICEF, WFP and WHO

The state of food security and nutrition in the world, in the World 2020, Transforming food systems for affordable healthy diets, FAO, IFAD, UNICEF, WFP and WHO

Beyond hunger, a growing number of people have had to reduce the quantity and quality of the food they consume. Two billion people, or 25.9 percent of the global population, experienced hunger or did not have regular access to nutritious and sufficient food in 2019. This situation could deteriorate if we do not act immediately and boldly.

There are many threats to progress. The 2017 and 2018 editions of this report showed that conflict and climate variability and extremes undermine efforts to end hunger, food insecurity and malnutrition. In 2019, the report showed that economic slowdowns and downturns also undercut these efforts. In 2020, the COVID-19 pandemic, as well as unprecedented Desert Locust outbreaks in Eastern Africa, are obscuring global economic prospects in ways no one could have anticipated, and the situation may only get worse if we do not act urgently and take unprecedented action.

The most recent estimate for 2019 shows that prior to the COVID-19 pandemic, almost 690 million people, or 8.9 percent of the global population, were undernourished. This estimate is based on new data on population, food supply and more importantly, new household survey data that enabled the revision of the inequality of food consumption for 13 countries, including China. Revising the undernourishment estimate for China going back to the year 2000 resulted in a significantly lower number of undernourished people worldwide.

Preliminary projections based on the latest available global economic outlooks, also presented in this report, suggest that the COVID-19 pandemic may add an additional 83 to 132 million people to the ranks of the undernourished in 2020

This is because China has one-fifth of the global population. Despite this, the trend reported in past editions of this report still stands: since 2014, the number of hungry people worldwide has been slowly rising. The new estimate for 2019 has revealed that an additional 60 million people have become affected by hunger since 2014. If this trend continues, the number of undernourished people will exceed 840 million by 2030.

Hence, the world is not on track to achieve Zero Hunger, even without the negative effects that COVID-19 will likely have on hunger. Preliminary projections based on the latest available global economic outlooks, also presented in this report, suggest that the COVID-19 pandemic may add an additional 83 to 132 million people to the ranks of the undernourished in 2020.

It is unacceptable that, in a world that produces enough food to feed its entire population, more than 1.5 billion people cannot afford a diet that meets the required levels of essential nutrients and over 3 billion people cannot even afford the cheapest healthy diet. People without access to healthy diets live in all regions of the world; thus, we are facing a global problem that affects us all.

We must look throughout the food system to address the factors that are driving up the cost of nutritious foods. This means supporting food producers especially small-scale producers to get nutritious foods to markets at low cost, making sure people have access to these food markets, and making food supply chains work for vulnerable people from small-scale producers to the billions of consumers whose income is simply insufficient to afford healthy diets.

Clearly, then, we face the challenge of transforming food systems to ensure that no one is constrained by the high prices of nutritious foods or the lack of income to afford a healthy diet, while we ensure that food production and consumption contribute to environmental sustainability. However, there is no one-size-fits-all solution for countries, and policymakers will need to assess the context-specific barriers, manage trade-offs and maximize synergies such as potential environment gains – to achieve the required transformations.

Food security and nutrition around the world in 2020

Five years into the 2030 Agenda, it is time to assess progress and to question whether continuing efforts implemented thus far will allow countries to reach SDG 2 targets. For this reason, this year’s report complements the usual assessment of the state of food security and nutrition in the world with projections of what the world may look like in 2030 if trends of the last decade continue.

Importantly, as the COVID-19 pandemic continues to evolve, this report attempts to foresee some of the impacts of this global pandemic on food security and nutrition. However, given that the full extent of the devastation that COVID-19 will cause is still largely unknown, it is important to recognize that any assessment at this stage is subject to a high degree of uncertainty and should be interpreted with caution.

The reasons for the observed increase of the last few years are multiple. Much of the recent increase in food insecurity can be traced to the greater number of conflicts, often exacerbated by climate-related shocks. Even in some peaceful settings, food security has deteriorated as economic slowdowns challenge access to food for the poor.

The Prevalence of Undernourishment (PoU) in Africa was 19.1 percent of the population in 2019, or more than 250 million undernourished people, up from 17.6 percent in 2014. This prevalence is more than twice the world average (8.9 percent) and is the highest among all regions.

In Latin America and the Caribbean, the PoU was 7.4 percent in 2019, below the world prevalence of 8.9 percent, which still translates into almost 48 million undernourished people. The region has seen a rise in hunger in the past few years, with the number of undernourished people increasing by 9 million between 2015 and 2019.

In terms of the outlook for 2030, Africa is significantly off track to achieve the Zero Hunger target in 2030. If recent rates of increase persist, the PoU will rise from 19.1 to 25.7 percent. Latin America and the Caribbean is also off track, even though at a much lower level. Mostly due to deterioration in recent years, the trend will bring the PoU from 7.4 percent in 2019 to 9.5 in 2030. Asia, while making progress, will also not achieve the target by 2030 based on recent trends. 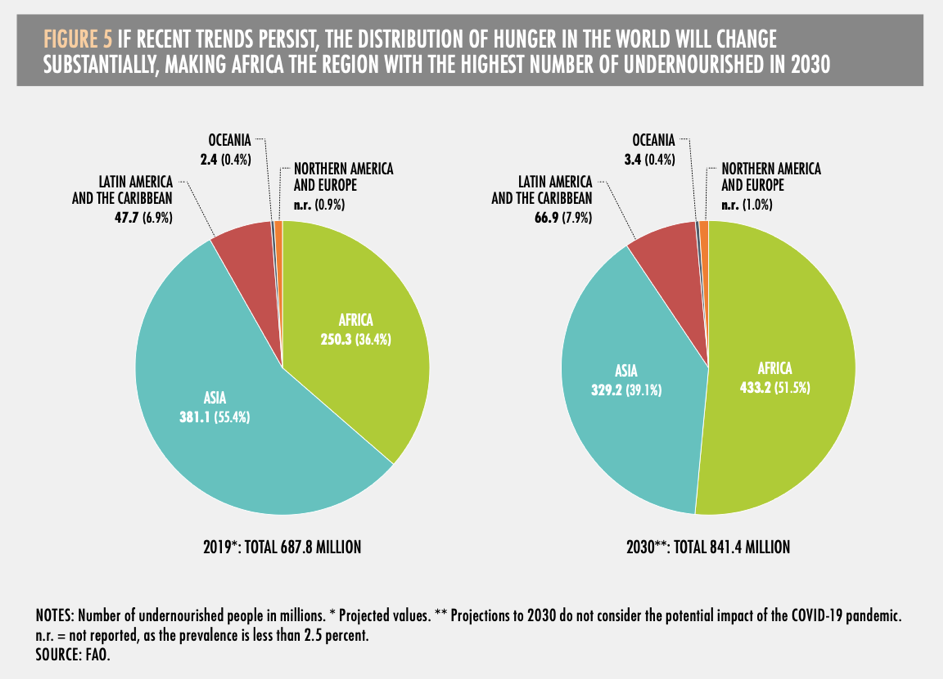 At the time of this writing, the COVID-19 pandemic was spreading across the globe, clearly posing a serious threat to food security. Preliminary assessments based on the latest available global economic outlooks suggest that the COVID-19 pandemic may add between 83 and 132 million people to the total number of undernourished in the world in 2020 depending on the economic growth scenario (losses ranging from 4.9 to 10 percentage points in global GDP growth). The expected recovery in 2021 would bring the number of undernourished down but still above what was projected in a scenario without the pandemic. It is important to recognize that any assessment at this stage is subject to a high degree of uncertainty and should be interpreted with caution.

The Prevalence of Undernourishment (PoU) in Africa was 19.1 percent of the population in 2019, or more than 250 million undernourished people, up from 17.6 percent in 2014. This prevalence is more than twice the world average (8.9 percent) and is the highest among all regions

Worldwide, the prevalence of child stunting was 21.3 percent in 2019, or 144 million children. Although there has been some progress, rates of stunting reduction are far below what is needed to reach the World Health Assembly (WHA) target for 2025 and the SDG target for 2030. If recent trends continue, these targets will only be achieved in 2035 and 2043, respectively.

The global prevalence of overweight among children under 5 years of age has not improved, going from 5.3 percent in 2012 to 5.6 percent, or 38.3 million children, in 2019. Of these, 24 percent lived in Africa and 45 percent in Asia. Australia and New Zealand is the only subregion with a very high prevalence (20.7 percent). Southern Africa (12.7 percent) and Northern Africa (11.3 percent) have prevalences considered high.

Worldwide, the prevalence of child stunting was 21.3 percent in 2019, or 144 million children. Although there has been some progress, rates of stunting reduction are far below what is needed to reach the World Health Assembly (WHA) target for 2025 and the SDG target for 2030. If recent trends continue, these targets will only be achieved in 2035 and 2043, respectively

Diet quality comprises four key aspects: variety/diversity, adequacy, moderation, and overall balance. According to WHO, a healthy diet protects against malnutrition in all its forms, as well as non-communicable diseases (NCDs) such as diabetes, heart disease, stroke and cancer. It contains a balanced, diverse and appropriate selection of foods eaten over a period of time.

A healthy diet ensures that a person’s needs for macronutrients (proteins, fats and carbohydrates including dietary fibres) and essential micronutrients (vitamins and minerals) are met, specific to their gender, age, physical activity level and physiological state. Healthy diets include less than 30 percent of total energy intake from fats, with a shift in fat consumption away from saturated fats to unsaturated fats and the elimination of industrial trans fats; less than 10 percent of total energy intake from free sugars (preferably less than 5 percent); consumption of at least 400 g of fruits and vegetables per day; and not more than 5 g per day of salt (to be iodized). While the exact make-up of a healthy diet varies depending on individual characteristics, as well as cultural context, locally available foods and dietary customs, the basic principles of what constitutes a healthy diet are the same.

The hidden health and environmental costs of what we eat

Assuming that current food consumption patterns accommodate expected changes in income and population, as per in the benchmark scenario (BMK), health costs are projected to amount to an average of USD 1.3 trillion in 2030. More than half (57 percent) of these are direct healthcare costs as they are associated with expenses related to treating the different diet-related diseases.

The other part (43 percent) accounts for indirect costs, including losses in labour productivity (11 percent) and informal care (32 percent). If, instead, any of the four alternative diet patterns used for the analyses are adopted (FLX, PSC, VEG, VGN), diet-related health costs dramatically decrease by USD 1.2–1.3 trillion, representing an average reduction of 95 percent of the diet-related health expenditures worldwide compared to the benchmark diet in 2030.

What people eat, and how that food is produced, not only affects their health, but also has major ramifications for the state of the environment and for climate change. The food system underpinning the world’s current food consumption patterns is responsible for 21–37 percent of total anthropogenic greenhouse gas (GHG) emissions, meaning originating in human activity, which reveals it to be a major driver of climate change, even without considering other environmental effects.