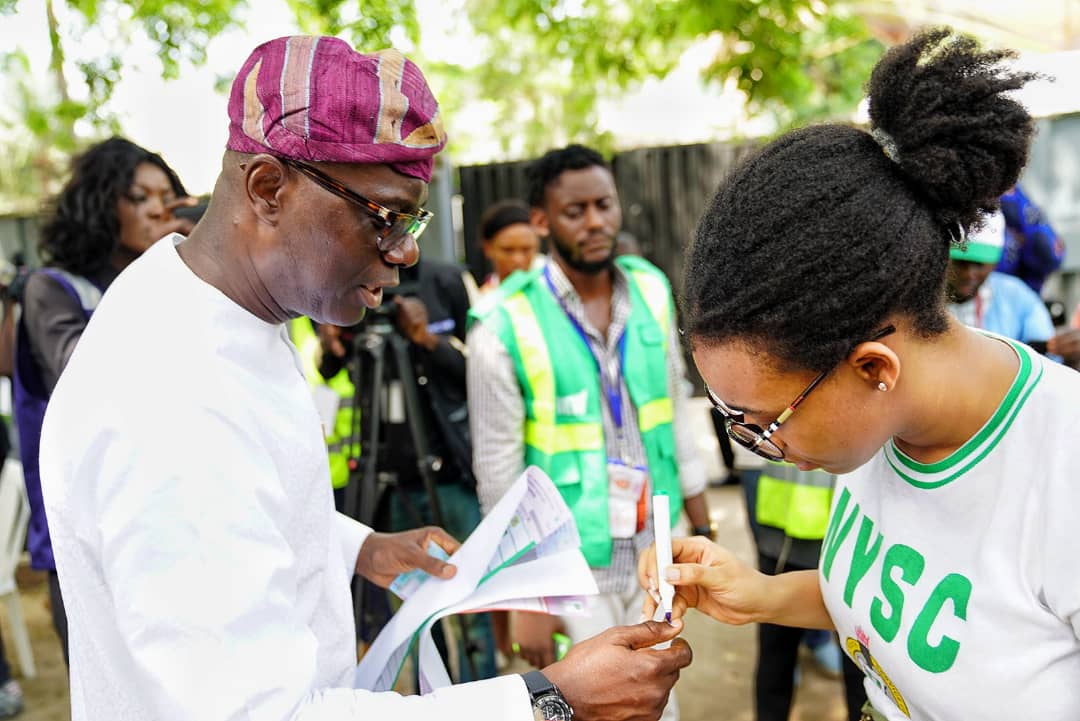 From a pool of 73 candidates, only two were considered frontrunners in Nigeria’s 2019 General Elections. Muhammadu Buhari, incumbent president and member of the All Progressives Congress (APC), and Atiku Abubakar, former vice-president and member of the opposition People’s Democratic Party (PDP), were competing for the leadership of Africa’s most populous state. In order to win, a candidate must get twenty five percent of the votes in at least two-thirds of Nigeria’s thirty-six states.

The two candidates who were considered frontrunners are both in their seventies, a stark contrast to the Nigerian population of which fifty-one percent are under the age of 35.

The two candidates who were considered frontrunners are both in their seventies, a stark contrast to the Nigerian population of which fifty-one percent are under the age of 35. Eunice Atuejide, aged 40, Chike Ukaegbu, aged 35, and Adama Garbo, aged 35, were some of the youngest candidates to challenge Buhari’s incumbency, yet, these minor party candidates were unable to achieve the support and attention enjoyed by Buhari and Abubakar.

Some of the issues at the forefront of this year’s elections are corruption, poverty, Boko Haram, mismanagement of the country’s huge oil reserves, and the economy, especially as Nigeria experiences a slow rebound from an economic recession in 2016.

Who is Muhammadu Buhari?

Muhammadu Buhari, 76 originally came to power as a military leader in the 1980s. In the 2015 General Election, Buhari used his military background to portray himself as a strict and fair leader. This proved to be an asset to his campaign where he opposed former Nigerian president, Goodluck Jonathan, and became the first opposition candidate to unseat an incumbent president since Nigeria’s return to democratic rule in 1999. Buhari’s 2015 manifesto was based on vows to root out widespread corruption, overthrow the Boko Haram insurgency, and rejuvenate Nigeria’s sluggish economy.

In 2019, Buhari promised to take Nigeria to the “next level,” asking Nigerians to grant him a second term so that he could build on the accomplishments of his first term. For many, the qualities that Buhari emphasized as making him an attractive presidential candidate, have now become liabilities. In fact, popular opinion in Nigeria is that Buhari’s administration only worsened Nigeria’s already pitiable state.

Who is Atiku Abubakar?

Atiku Abubakar was Buhari’s main challenger in the 2019 presidential election. With a background in business and philanthropy, Abubakar also served as vice president of Nigeria between 1999 and 2007. This general election marked Abubakar’s fourth attempt at becoming Nigeria’s president. During the campaign, Abubakar highlighted critical shortcomings of the Buhari regime, notably poverty and youth unemployment levels, and the increasing threat that Boko Haram poses to Nigerian security.

Trouble at the Polls

Nigeria’s 2019 General Elections had a rough start. The election, which was scheduled for Saturday February 16, was moved to Saturday February 23, just five hours before the polls were set to open. The director of the Independent National Electoral Commission (INEC), Mahmood Yakubu, maintained that the decision was driven by logistical reasons and not political pressures. Nevertheless, both the APC and the PDP accused the other party of colluding with INEC in an attempt to influence the outcome of the elections. Buhari even went as far as to call for military action against people attempting to commit fraud, a remark that was considered by many to be incendiary in a time of heightened tensions.

There were reports of violence during the campaign season with 260 deaths reported between October 2018 and February 2019 and 39 deaths reported on election day. Just days before the election, three electoral offices containing voting materials in Abia, Anambra, and Plateau states were burned down, in what officials considered an attempt to sabotage the electoral process.

Nigeria has a population of about 190 million, and out of the 84 million people registered to vote (represents about 44%), only 73 million have their voter’s cards. Voter turnout in this election was the lowest recorded number in Nigerian history; only 35.6% of people voted compared to 43.7% of Nigerians who voted in the 2015 General Elections.

One cause of the low turnout was the postponement of the election from 16th to 23rd February: voters are required to vote in the district they are registered, however, people who already traveled for the first election date may not have had the means or the motivation to travel again. Secondly, many people were not interested in voting due to mistrust and disappointment with the competency of the Nigerian government. Buhari’s first term has been met with mixed reactions, as many feel he did not do enough to revive the country from its economic slump or fulfill his promise to wipe out corruption in the government.

This year marks 20 years of uninterrupted democracy in Nigeria. As of February 27, INEC, the body responsible for overseeing elections in Nigeria, concluded that Muhammadu Buhari has been re-elected for a second term, defeating his principal opponent, Atiku Abubakar. Although reports indicate that Buhari won by a margin of nearly 4 million votes, the opposition contests the results, citing inconsistency in the data.

Kristina Ohemeng is a junior at Columbia University studying Political Science, French and Francophone Studies. She is currently an intern with WATHI where she supports the team’s work in research and content creation.