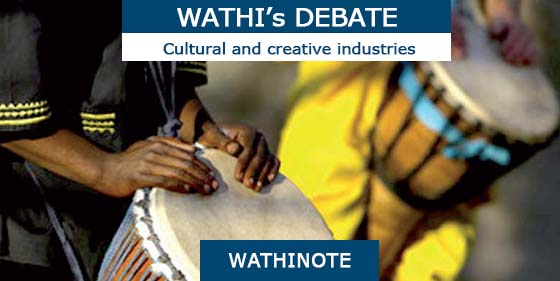 Nigerian creative industry under the AfCFTA: Threats and opportunities, Nairametrics, May 2021

Like other sectors of the economy, the Nigerian creative industry is gearing up for the opportunities that the African Continental Free Trade Area (AfCFTA) offers the member States. But one may ask, beyond the opportunities, are there inherent threats that lurk around the free trade regime? For one, it is believed that any member State that fails to create an enabling environment for businesses to thrive within its country may lose rather than gain under the AfCFTA.

In the Nigerian creative sector, for instance, the COVID-19 pandemic has, amongst other things, exposed the linear revenue streams of the entertainment space, forcing most of the talents to start thinking of new ways of generating incomes beyond the traditional offerings in the industry.

Beyond the challenges of the pandemic, the focus is now on the AfCFTA and its promises of an enlarged and liberalised market. Given that the creative industry thrives in a system that guarantees protection for innovations, it remains to be seen what safeguard is available under the AfCFTA for Intellectual Property (IP) right holders. The IP Protocol and those of Investment and Competition Policy are the three Protocols that originally form the crux of the Phase 2 negotiation. The Protocol on e-commerce was initially meant for Phase 3 but has been brought forward to Phase 2 because of the impact of Covid-19. The pandemic has amongst other things, forced consumers to resort to e-commerce and digital space following the restrictions put in place by most countries to curb the impact of the virus.

The scalability of the Nigerian creative industry within the AfCFTA will depend on the existence of a robust framework that supports IP rights and provides digital security. With the recent incidents of cyber-attack in the United States, African countries should improve cybersecurity within the continent to support innovation and e-commerce. Related to this, is the need for data protection and localization on the continent. There is a relationship between a strong IP framework and heightened innovation.

McKinsey’s report noted that “Between 2014 and 2019, Nigeria’s bustling fintech scene raised more than $600 million in funding, attracting 25 percent ($122 million) of the $491.6 million raised by African tech startups in 2019 alone—second only to Kenya, which attracted $149 million.”

The creative industry may well be one of the earliest vehicles that will drive the AfCFTA agenda and contribute to addressing the challenges of unemployment in Africa if properly harnessed.

The scalability of the Nigerian creative industry within the AfCFTA will depend on the existence of a robust framework that supports IP rights and provides digital security. With the recent incidents of cyber-attack in the United States, African countries should improve cybersecurity within the continent to support innovation and e-commerce

Interestingly, the creative ecosystem is an evolving field and one that does not lend itself to a definitive term, making it difficult to be pigeon-holed or defined. As a result of this, the United Nations Conference on Trade and Development (UNCTAD) considers it as an evolving concept based on creative assets with the potential to generate economic growth and development. It covers a diverse set of knowledge-based economic activities, such as advertising, architecture, arts and crafts, design, fashion, film, video, photography, music, performing arts, publishing, research and development, software, broadcasting, and digital assets.

Nigeria’s burgeoning creative industry gives it a competitive advantage on the continent. However, there are both internal and external factors that may pose serious threats to the creative economy if not addressed.

On the internal front, are challenges of poor infrastructure, obsolete and inadequate framework for the protection of IP rights, weak institution, fragmented market, and lack of access to funding amongst others.

Externally, there is the fear around the possibility of an influx of talents and competition from other parts of the continent to the country. But competition itself is not a bad thing as it aids efficiency and innovation. The Nigerian creative industry should therefore prepare itself for this possibility. The existing IP laws are weak and do not protect the chain of titles available to IP right owners both in the traditional and digital platforms.

The AfCFTA member countries must collaborate to address these challenges. The type of cooperation envisaged under Article 4 of the AfCFTA can only be made possible by the harmonization of the IP laws through regional framework. Unfortunately, Nigeria has not enjoyed that level of regional collaboration one would expect from a country that holds so much influence on the continent. Two of these regional IP institutions that come to mind are the African Regional Intellectual Property Organization (ARIPO) and the OAPI Organisation Africaine de la Propriete Intelluelle (OAPI).

Nigeria can learn from other African countries that are leveraging technology to liberalize their business environment and positioning themselves as innovation and tech hubs on the Continent. Rwanda has invested heavily in infrastructure leading to reformation and ease of doing business. This has led to a rapid growth of tech-enabled startups in the country. Just a month ago (April 2021), the Ethiopian government signed what has been described as the largest blockchain deal ever to be signed by a government aimed at creating a national database of student and teacher IDs using a decentralized digital identity solution.

Nigeria can learn from other African countries that are leveraging technology to liberalize their business environment and positioning themselves as innovation and tech hubs on the Continent. Rwanda has invested heavily in infrastructure leading to reformation and ease of doing business

The deal involved three other companies, Cardano (a Swiss non-profit organization), IOHK and Emurgo (a software company from Japan). Despite the huge infrastructure deficit and regulatory challenges in Nigeria, Lagos has, against all the odds, remained a leading tech and innovation hub in Africa.  What follows from the foregoing is a call to action to develop a framework that will safeguard innovations and creative assets within the country. This will provide the youth and women who dominate this critical sector, the enabling environment to scale and by so doing, guarantee an inclusive free trade regime.