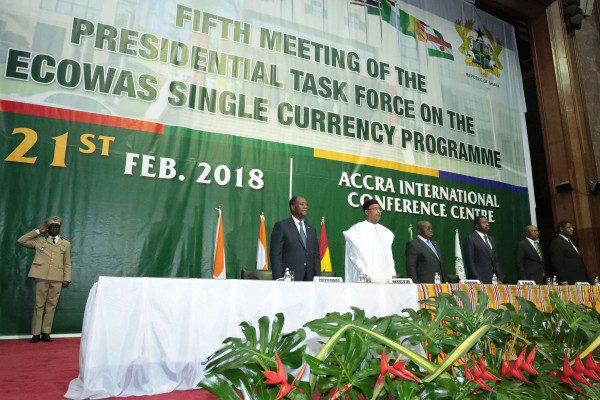 “In the long run, the CFA franc will be called the eco. We will continue to work on it, we hope that it can be done as soon as possible. Countries that are ready and have made significant efforts in terms of good management, good governance, deficit control, debt control, will probably be ready by 2020.”
– Statement by Ivorian President Alassane Ouattara on 9 July in Paris on the occasion of a visit to his French counterpart Emmanuel Macron.

At the end of the Summit of Heads of State of the West African Economic and Monetary Union (WAEMU) in Abidjan on 12 July, President Ouattara released a statement, asserting that there would be no change in parity of the regional currency at the time of the entry into force of the eco. He also expressed his preference for a fixed exchange rate between the future single currency and the euro – just like the CFA franc.

This is despite the fact that the official communiqué of the Summit of Heads of State of the Economic Community of West African States (ECOWAS) which took place on 29 June; and in which the Ivorian President participated, clearly announced the choice of a flexible exchange rate regime for the anticipated single currency.

Many academic articles exist on the question of the correlation between economic growth and membership of the CFA monetary zone: they however do not arrive at a firm and definitive conclusion. All those who have studied Economics know that the conclusions of even the most elaborate academic work depend on a number of assumptions, technical constraints, methodological choices and the quality of the data used. They also depend, more often than not than one would like to admit, on the hypotheses that researchers, or those on whom their funding depends, wish to validate and defend.

President Ouattara did not fail to highlight the supposed advantages of the fixed parity of the current CFA franc with the euro, referring to the low inflation in the WAEMU zone, and much more questionably, the strong economic growth of the countries that use the West African CFA franc

In fact, the endless debate on the advantages and disadvantages of the CFA franc, which is not limited to the debate on the advantages and disadvantages of a fixed exchange rate regime compared to a flexible exchange rate regime, has always seemed to me to be of little use. The CFA franc is not only a currency with a fixed exchange rate against the European single currency, and before it, a fixed parity against the French franc. It is a legacy of colonial history and a currency governed by a coherent set of rules and institutions that cannot be separated from the political context of its emergence, its evolution and the special relations between France and its former colonies in West and Central Africa.

The question of currency, in most cases, is first and foremost a political issue. Decisions taken by political leaders take into account the economic context, the objectives of growth, inflation management and structural transformation of the economy, as well as other political, social, regional and international parameters. The Ivorian President’s statements are particularly disturbing because the question of currency at a national level – and even more so that of a single currency at the level of 15 countries in an African region – is primarily a political issue.

It is a legacy of colonial history and a currency governed by a coherent set of rules and institutions that cannot be separated from the political context of its emergence, its evolution and the special relations between France and its former colonies

The choice of a single currency in West Africa must be an indication of a strong political will to pursue the regional integration project that has been underway for more than 40 years. ECOWAS, created in 1975, is the institution that is statutorily charged with championing this integration project in its various dimensions. It has a remarkable record in some areas but can be said to be largely inadequate in others. Despite its weaknesses, – mostly fuelled by those of its Member States including the regional power, Nigeria – ECOWAS remains the only legitimate institution equipped to deepen regional, political, security, cultural, trade, economic and monetary integration.

Establishing a single currency for the 15 ECOWAS countries is not a requirement dictated by economic theory. In fact, the zone probably does not yet meet the generally stipulated criteria in order to be considered as an optimal currency zone. It is however precisely to achieve this status that a comprehensive process has been put in place to be followed by all countries to meet the convergence criteria.

On the other hand, monetary union is not an end in itself. It must be accompanied by a coordinated management of public policies to promote economic growth that generates jobs, reduces inequalities and controls inflation. The latter objective is obviously crucial for monetary stability. However, in a region that needs to create tens of millions of jobs in the coming years to serve its youth – which would necessarily require structural transformations – inflation control cannot be presented as the impassable horizon of our ambition.

The most significant threat to the success of the single currency project today is the absence of strong political figures, heads of state and leaders of regional organisations, who can “sell” the West African single currency to the people with conviction and passion

The political choice of a single West African currency comes with certain risks for the various national economies and these must be identified and prevented. Nevertheless, it is not with fear, timidity, indecision, incoherence and discordance that current leaders will build a better future for the people of the region. Whether ECOWAS countries are ready to move to the single currency in 2020, 2025 or 2030 is not the most important issue. The question is whether they really want to take this step, whether they have taken the long-term strategic issues into consideration and whether they understand that it is imperative to engage their citizens in this powerful project by explaining how it would contribute to improving their well-being.

If the ambition of a few heads of state is reduced to renaming the CFA franc into the eco – a common currency shared by the eight WAEMU countries – then this will be without the dominant demographic and economic power, Nigeria, and without the second biggest West African economy, Ghana. It will therefore be better to conserve funds and time spent in endless meetings, and to stop distracting people with contradictory announcements. Renouncing a full-fledged regional currency would continue the perpetuation of the psychological barriers to full political, economic and human integration in West Africa.

Gilles Olakounlé Yabi is a political analyst and economist. A former Project Director, West Africa with the International Crisis Group, and a former journalist with Jeune Afrique, he is the founder and the president of the Steering Committee of WATHI. The opinions expressed in this article are personal.