Accueil English The Thing About Rainbows is That We See Their Beauty Mostly on Rare Occasions: Reflections on Xenophobic Violence in South Africa 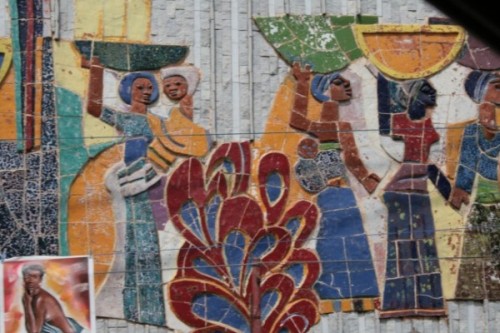 The Thing About Rainbows is That We See Their Beauty Mostly on Rare Occasions: Reflections on Xenophobic Violence in South Africa

The Thing About Rainbows is That We See Their Beauty Mostly on Rare Occasions: Reflections on Xenophobic Violence in South Africa

I remember vividly where I was this April when I heard the news of the recent spate of xenophobic violence against Africans in South Africa. I was sitting very content somewhere in Bangui that we called a Cameroonian restaurant. If we were very honest, however, it was closer to a long rectangular cement box, with tables covered in clear plastic sheets and shaky plastic chairs to match. We did have fans. And they were extremely welcome, even though they were just circulating the hot air. But we were thankful for small mercies. When it is a choice between hot air that is circulating and hot air that is stagnant- the former wins. Hands down. And of course the food was great. So delicious, in fact, that even the most squeamish of us was able to pretend while we ate, that we did not hear the constant scurrying of rats up and down in the roof or notice how unstable and weak the makeshift painted cardboard ceilings looked.

But it was not the fantastic food that was on my mind. As the news of this xenophobic violence was shared with me I remember sitting with this indescribable feeling. All I am sure of is that it was in my gut. It was physically tangible, bordering on something between disgust, anger, sadness and disappointment. And it was monumental.

We were strangers to each other a few hours before, and now we were talking as old friends, coming together as brothers and sisters of Africa.

Ironically this occurred while I, a Sierra Leonean living in Dakar, currently on a short work mission in the Central African Republic, was having great conversation with two Cameroonians working temporarily in that same country, who lived in South Africa and the USA respectively. We were strangers to each other a few hours before, and now we were talking as old friends, coming together as brothers and sisters of Africa. It was as I was reveling in the beauty of this connection, and inadvertently drowning in a haze of false euphoria regarding my deliberate choice to live on this great continent, that I heard the news of the recent incident in South Africa.

And this is how I heard about it. One of my Cameroonian colleagues read a statement that President Robert Mugabe of Zimbabwe had made on the subject. He was reading it directly from his mobile phone on the webpage where it had been shared. As my brain is not as sharp as President Mugabe’s, I can’t quote his statement exactly, but in essence it went something like this, ‘ South Africans can strike the statue of a white man until it tumbles to the ground, but they can never slap a white man in real life. Yet they can stone a fellow African to death.’ As far as I am concerned the first part of the statement is not entirely relevant, but it is the last sentence that has struck me. Not in comparison to slapping or not slapping white people, but in comparison to my deep and strong memories of the solidarity shown to this nation and her people during the struggle against apartheid….. the hosting of South Africans in exile….. Africans even risking their freedom and sometimes lives for this distant cause.

The majority of our nations, whatever they celebrated at independence, are still enslaved at worst and at best, still colonized.

All this to now experience such deep hatred in Africa. This is pathetic. It needs to change. In ALL our countries. Because this is not a South African affair. We need to be concerned with this on the whole continent. Of course, all over Africa you see great acts of kindness as people host neighboring refugees or Internally Displaced Persons (IDP’s). It is undeniable the warmth of the human spirit. If I am not mistaken we are the continent that carries the greatest refugee populations. But let’s not also ignore our inability as humans to accept others, or to agree that even if we don’t accept them, that we can manifest this non-acceptance non- violently.

Mugabe’s statement brought up something that I have been fighting within myself not to come out strongly and name. It somehow felt unfair, harsh. But it is true and it might help if we were open about it and stopped pretending. Indeed everyone loves to hate on President Mugabe. We will probably regret that one fine day though. For all the wrong Mugabe may have done, and I am no Zimbabwe expert, he is one of the only living leaders fighting for independence. In over simplifying things into good and bad, black and white we should be careful to not underestimate the value of this. And let us not fool ourselves with new definitions, theories and terminologies; because the majority of our nations…whatever they celebrated at independence….. are still enslaved at worst and at best, still colonized.

Though the intensity of the violence may have made South Africa remarkable, this is a continental issue.

And let’s not forget that these acts of violence emanated from the country that is representing us at the African Union. It’s just one of those unfortunate things like the fact that the African Union is hosted in a country where the majority of inhabitants don’t consider themselves Africans, or that it is largely funded by non-African governments. Anyway, putting such misfortunes aside let us hope that South Africans all over the world who are better than these acts (and we know these people exist in great numbers) will be shouting from every corner of their country and the globe against what happened. They should know better than anyone else the full implication of such an act of xenophobia. They should be ashamed for their brothers and sisters and flock to the streets in swathes demonstrating their outrage.

I know it happened to an extent, there were some marches and some statements, but let this lead to some sustainable change. Let the movement continue. I want to hear leaders around Africa giving this act the importance it deserves even now in December, because only this will bring an end to this kind of violence in the future. Because though the intensity of the violence may have made South Africa remarkable, this is a continental issue.

We know South Africa as the Rainbow nation. The wonder, the joy, the beauty; this is the wonderful symbolism that is associated with rainbows. But how beautiful can a rainbow be if we have been beaten to a pulp and can’t see clearly through swollen, bloody, black eyes? How beautiful can a rainbow be if we will see it only through a cloudy haze of despair at the contradictions of this country that struggled against injustice, now doing the same thing to others? Can we really appreciate the beauty of the rainbow if we are dead?

We see rainbows after the rain, and when the sun has come back out again. The new hopeful beginnings. But I suppose one thing about rainbows is that they do not appear often. So while the beauty is magnificent we see it rarely. I live in hope that this part of the image does not apply to Africa’s rainbow nation.

The ideas and opinions expressed are those of Mariama Conteh and do not represent the organisation she works for.

Mariama Conteh
Mariama Conteh is a conflict resolution and mediation professional, with 15 years experience working both in West Africa and internationally. She has worked for organizations such as Conciliation Resources, Crisis Management Initiative (CMI) and Catholic Relief Services (CRS). Mariama holds a Masters degree in Development Studies from the School of Oriental and African Studies in London. She is a member of WATHI.