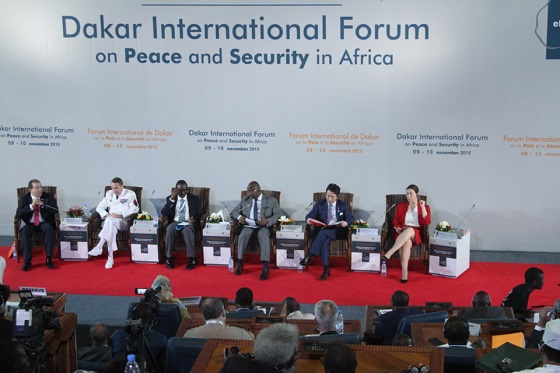 The last week of October was marked by a wave of arrests of religious leaders and ordinary citizens suspected of terrorism vindication in different parts of Senegal. Senegal, which has never been worried by terrorism, has officially joined the long list of countries that are permanently living under the fear of terrorism.

Senegal has a special destiny in West Africa because of being the only country in West Africa that has never known a coup d’état or major instability since gaining independence in 1960. Unlike many countries in the sub regions such as Nigeria and Côte d’Ivoire that have experienced religious clashes between Muslims and Christians, Senegal has managed to strengthen its social cohesion. The Muslims who represent 94% and the Christians 5% of the population live in a perfect harmony. And their pacific cohabitation is often cited as an example.

Moreover, Senegal had managed to keep its sovereignty at the moment where many countries in the region were falling into chaos following the conflagration of conflict in the Mano River in the early 90’s.

This exceptional trajectory of Senegal yet in an unstable region has many explanations. This prowess is explained firstly by the fact that Senegal enjoys a well-trained army. Despite their limited means, the army has always endeavored to ensure the Senegalese sovereignty. In addition to that, the army is known to be republican. Its leaders have always refrained from interfering in political affairs.

This long period of stability can also be explained due to the character of Islam practiced in Senegal known as Suffism. Unlike Wahhabism which promotes fundamentalism and non-tolerance towards other religions, Sufism encourages pacific coexistence, mutual respect and interfaith dialogue.

Senegal is known as a home of Suffism stronghold in which numerous religious strongholds such as Mourid, Tijani, Niassene, Qadiriya, Layenne cohabit. The leaders of these respective religious strongholds grant a great importance to the peace and stability of Senegal. They teach and provide advice to their disciples who vow a blind love to them.

But Senegal is not shielded from terrorism…

Despite this apparent stability, Senegal is not sheltered from terrorism. If for a long time some Senegalese authorities have always denied the vulnerability of Senegal, today it’s no longer permitted to doubt that it is in the crosshairs of jihadists. The recent events in the country give credit to this hypothesis. The number of Senegalese officially recruited in the ranks of the Islamic State in Syria or Libya is estimated at 5. Never in the history of Senegal has such a high number of Senegalese fighters been recorded in the ranks of terrorist groups.

The latest of the wave of departure dated back to 17 November when Sadio Gassama, a young student at the University of Dakar announced on his Facebook page that he had joined the Islamic State in Libya in order to accomplish “medical Jihadism”. These departures clearly indicate that relays of some jihadist groups are well implanted in Senegal and that the process of indoctrination of many young Senegalese seems to have begun long time ago.

If for a long time some Senegalese authorities have always denied the vulnerability of Senegal, today it’s no longer permitted to doubt that it is in the crosshairs of jihadists.

In addition, in their logic of expanding their activities across the world, the Islamic State encourages its fighters to return to their respective countries after receiving good training in asymmetrical warfare strategy and explosives handling, in order to continue the Jihad. The return of these young Senegalese to the fold could be a real threat to national security.

The arrest of Imam Alioune Badara Ndao in Kaolack and of Makhtar Diokhane in Niger has not finished revealing all its secrets. According to preliminary investigations, Makhtar Diokhane is a representative of Boko Haram in Senegal. The raid on his house in Kaolack and the tapping of his phone conversation further revealed that Makhtar Diokhane who was a former disciple of Imam Alioune Ndao was in contact with some members of the northern based terrorist group. It also revealed that some Senegalese have already joined the dreadful Boko Haram in Northern Nigeria

Senegal has become a popular destination for many Westerners who appreciate its legendary stability. Many foreigners, especially from France have settled in Senegal particularly in coastal cities like Dakar, Saly, Mbour or Saint Louis. Similarly, many foreign companies and international organizations are based in Senegal, the country of “teranga” which means hospitality in Wolof.

In their mission to pick on Westerners or to attack Western interests, it’s clear that Senegal remains a privileged target and that any flaw could be exploited by the terrorists as a reprisal for the French-led intervention in Mali in which Senegal has been actively taking part. In addition, with the current regional security context characterized by the resurgence of terrorist attacks in Mali, a volatile security and political situation in Guinea Bissau and the growing expansion of the Islamic State of West Africa, it is obvious that Senegal cannot be an island of peace in a troubled ocean.

Terrorism is an international plague from which no country is spared. As Senegal is experiencing its first real alert, it’s important to guide this critical stage as it marks a transition from a country “apparently forgotten” by terrorists to one which is under threat. Admittedly, the Senegalese government has made efforts. The defense budget has been significantly increased. Also, Senegal has been engaged in multilateral and bilateral cooperation in order to curb the terrorist threat. It is in this vein that Senegal, with the financial help of France, launched the “karange” operation which means protection in Wolof, in the frame of the action plan against terrorism.

Yet, it’s important to bear in mind that contemporary history has shown that many countries have become today the terrorist privileged target because of a poorly conducted response in the early hours of the counter terrorism operation. The resurgence of Boko Haram in 2009 is a result of an excessive enemy-centric approach, from which his charismatic leader Muhamed Yusuf was killed extra judicially.

The fight against terrorism in one country should not be modeled on the fight against terrorism in another. Every country has its own socio economic situation, therefore the response should be done accordingly. In Senegal, the most urgent measures to be taken should not be the banning of the Burqa. The poor communication that accompanied these measures has created a sentiment of “burqaphobia” in the country. As evidence, it’s reported by local media that two women wearing the burqa were already victims of beating in Dakar. The Senegalese government should address this specific issue in order to keep popular justice from degenerating. An unclear decision would only create anarchy, which could further lead to inter community clashes.

Yet, the real potential threat in Senegal is not the women with Burqa but the child beggars also known as Talibe in Senegal. These least favored children, without parental and governmental assistance constitute today a real security threat. Their number keeps rocketing every year. They were estimated around 300, 000 scattered all around the Senegalese territory. For the Dakar region only, they are estimated around 54 837.

In crisis situation, children are the most vulnerable. They are often instrumentalized. In some cases they are used as sexual slaves and others as child soldiers. Like in Nigeria where young girls are unconsciously used by Boko Haram to carry out bomb attacks with their explosive belts, jihadists could easily instrumentalize these poor kids to carry out attacks in Dakar or any region of Senegal to better make impact as they like doing in every attack.

The begging of these children has been forbidden several times but after every pressure from religious leaders the government goes into reverse for fear of sanctions during elections. In Senegal religious leaders are known to be powerful, respected and very influential. I believe that when the national security is threatened, political issues should be relegated in the second position.

The Senegalese government should go population-centric, by involving to a greater extent the population and the civil society in the collection of information. Successful counter terrorism in Senegal requires a balance of political, social and security measures. And Senegal will only succeed in this critical phase if the huge amount of money spent in buying armament is also spent in eradicating poverty. Senegal needs to implement criminal justice effectively .

Mouhamadou Kane
Mouhamadou Kane is a political and security risk analyst. He has worked as junior research fellow in the Conflict Prevention and Risk Analysis (CPRA) division at Institute for Security Studies (ISS) based in Pretoria. Mouhamadou Kane is also a PhD candidate in International Relations at Jilin University, P.R China.