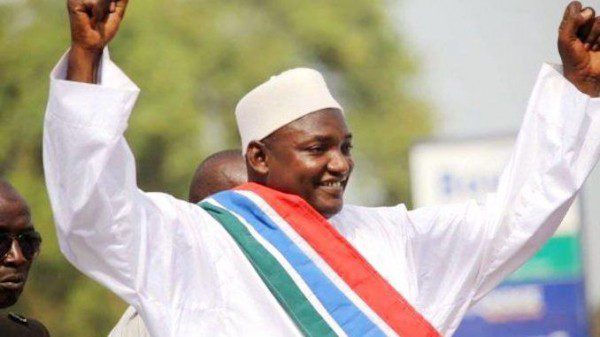 Gambia under Barrow: A Case of Déjà vu?

With just about 2 million people, a GDP of less than USD2 billion and an area of 11,000 sq km, The Gambia is the smallest nation in the continental mainland of Africa. However, in January 2017, the eyes of the world were turned on this tiny country as it successfully ousted Yahaya Jammeh, long-time authoritarian ruler that kept the country under his thumb for 22 years. Adama Barrow was democratically elected as the President of The Gambia in December 2016 and was sworn in by January 2017 after a series of events that led to the eventual exiling of the former President Jammeh.

Adama Barrow has now been in power for thirty months, with just a few more months left in the initial coalition agreement of a three-year rule. It is therefore important to examine how The Gambia has fared under him, thus far.

The Whirlwind that was Jammeh

In the late 1970s, a brilliant marketing ploy in an attempt to boost the tourism sector in the beautiful country resulted in its naming as “The Smiling Coast”. The Gambia is a slice of a country tucked snugly within Senegal’s borders in West Africa. However, unlike Senegal, The Gambia was colonized by the British which makes it a member of the smaller sub-group of English-speaking West African countries that includes Nigeria, Ghana, Liberia and Sierra Leone.

Before Yahaya Jammeh seized power from Dawda Jawara with a “bloodless” coup in 1994, The Gambia had one of the fastest growing economies in the West African sub-region. It was also ranked third (behind Ivory Coast and Cape Verde) in its per capita GDP. There were however allegations of corruption against Dawda Jawara’s government.

After coming into power, Yahaya Jammeh suspended the Gambian constitution as well as all political parties. During what would become a 22-year reign, opposition elements within and outside his government were either imprisoned, tortured or assassinated. There was a full crackdown on the independent media with forced closures, calculated attacks, kidnappings and assassinations including the murder of prominent journalist Deyda Hydara in 2004. Jammeh was also fingered in arms trafficking and the illicit drugs trade in The Gambia, with WikiLeaks alleging that he received a landing fee of $3 million for every cargo of drugs that arrived from South America.

On the other hand, a positive unexpected outcome of Yahaya Jammeh’s rule in was the banning of Female Genital Mutilation (FGM) and child marriages in The Gambia. After the return to democracy in 1996, Yahaya Jammeh went on to win a number of elections often with a landslide. Some of these elections were however regarded as not being free and fair.

Take the Money and Run

In December 2016, Yahaya Jammeh lost the Gambian presidential elections to Adama Barrow. In a move that surprised even the most optimistic Gambian political analysts, he called the President Elect and congratulated him with the now famous words “I am the outgoing president; you are the incoming president.” He however did an about-turn when he declared the elections fraudulent and attempted to extend his tenure.

Thanks to the un-precedented intervention of Economic Community of West African States (ECOWAS) led by Senegal through the threat of military force, Yahaya Jammeh was forced to relinquish power and fled to Equatorial Guinea. He has however been accused of plundering state coffers and making away with close to $1 billion  in the Organised Crime and Corruption Reporting Group (OCCRP) report. He also retained the privileges of being a former head of state, despite the numerous allegations against him of involvement in crimes ranging from murder to rape.

The Prince that was Promised or President by Accident?

Adama Barrow was not the first choice of the coalition of Gambian political parties that was formed to oust Yahaya Jammeh. The former real estate agent that had also worked as a security agent while pursuing his studies in the United Kingdom has struggled against the label of “President by Accident”. He has tried to surround himself with a litany of advisers but has also been accused of indecision and a slowness to act in a bid to try to satisfy everyone.

There are rumours that Barrow was only chosen because the more prominent leader of the United Democratic Party (UDP), Ousainou Darboe, had been thrown in jail by Yahaya Jammeh. Ousainou Darboe was later released by Adama Barrow, then appointed as the minister of Foreign Affairs, then later as the vice president. However, in March 2019, President Adama Barrow removed Ousainou Darboe as vice president and replaced him with the Health Minister, Isatou Touray. He also dismissed two other ministers that are also members of the UDP and had been pardoned by him (after being imprisoned by Jammeh) during a cabinet reshuffle in 2018, and curiously added two ministers that had worked under Jammeh to his cabinet. These dismissals came after he revoked the appointment of a representative of the party in the National Assembly, Ya Kumba Jaiteh a move that still has its constitutionality under debate and was oddly reminiscent of the Jammeh era.

Yet, in December 2017, the Gambian National Assembly passed a law establishing the Constitutional Review Commission (CRC). This Commission will oversee the writing of a new constitution for The Gambia, a highly requested move given the numerous amendments that the 1997 Constitution went through under the leadership of Yahaya Jammeh.

Adama Barrow was not the first choice of the coalition of Gambian political parties that was formed to oust Yahaya Jammeh. The former real estate agent that had also worked as a security agent while pursuing his studies in the United Kingdom has struggled against the label of “President by Accident”

What the Numbers are Saying

It is still early days to fully assess the impact of Barrow’s presidency on the Gambian economy. A Chatham House address by the President in 2018 laid out lofty plans for Gambian socio-economic growth, including the improvement of healthcare services, the growth of small businesses and attention to the welfare of women.

Barrow has been credited with focusing more on infrastructure development projects, which is arguably partly evidenced by the construction of the “Senegambia” bridge linking Gambia to Senegal. This bridge was initially mooted in 1956 but was only finally launched in January 2019. President Barrow has also been credited with cutting public expenditure in order to reign in the nation’s debt. On the other hand, he has been accused of being slow on institutional and legal reforms.

The Gambia’s Gross Domestic Product (GDP) growth rate has risen steadily since the low point of 0.4% in 2016 with the real GDP growth rate in 2018 estimated at 6.6%. The Gambia’s small economy is supported mainly by tourism, rain-dependent agriculture, and remittances and has historically been very vulnerable to external shocks with GDP growth rates ranging from -4.3% to 6.6% in the past ten years. Notwithstanding, the World Bank has attributed recent gains to strong recoveries in trade, tourism and construction as well as improvements in electricity provision.

On the other hand, lower grant revenues and unbudgeted transfers to state owned enterprises have worsened the country’s fiscal situation and resulted in a sharp increase in net domestic borrowing from 0.7% of GDP in 2017 to 3.4% in 2018.

Barrow has been credited with focusing more on infrastructure development projects, which is arguably partly evidenced by the construction of the “Senegambia” bridge linking Gambia to Senegal. This bridge was initially mooted in 1956 but was only finally launched in January 2019

Managing public debt levels in order to free up more funds for investment in public services and infrastructure will be one of the main challenges for Barrow’s government. This will be alongside other persisting issues such as economic diversification, market expansion, up-skilling the population and boosting private sector investment for job creation.

What the People are Saying

It is understandable that the Gambian people are eager for justice to be served to Yahaya Jammeh and his cohorts. There are ongoing hearings at the Truth, Reconciliation and Reparation Commission (TRRC) seeking to unearth and catalogue all of the atrocities committed by Jammeh and his government. The Janneh Commission was also set up to investigate financial impropriety under Jammeh’s government. The understanding is that this is to build a solid case of human rights violations against him. However, there appears to be a general dissatisfaction with the pace of the proceedings.

Also, in August 2019, The Gambian government was forced to defend its decision to release three ex-army officers that confessed to the killing of Deyda Hydara under orders from Jammeh. An article by the weekly Jeune Afrique reports Baba Hydara, the son of Deyda Hydara as saying “It is wrong to put these murderers at liberty after hearing these confessions.” The Minister of Justice, Abubacarr Tambadou, justified this move by explaining that it was important to avoid discouraging witnesses from coming forward.

Despite the above, Gambians are basking in a new age of free speech and expression. This freedom has experienced a few hiccups, most notably in June 2018 when armed policemen opened fire on peaceful protesters in a Gambian village, killing three people. Several editorials and media reports strongly criticize the governments and its officials, just like a man taking gasps of air after being underwater for too long. Some Gambians in the diaspora have returned home to rebuild in an environment that is now considered to be generally more conducive to growth.

Imitation is the Highest Form of Flattery

In August 2019, the Gambian Central Bank presented new currency notes to President Barrow with the face of Yahaya Jammeh replaced with images of national birds. Adama Barrow has also facilitated the re-admission of The Gambia into the Commonwealth, after a shock exit in 2013 by Yahaya Jammeh. These actions, as well as others, are seemingly to distance the new leadership from the old one. However, there are fears that the two governments are more the same than they are different.

Despite the above, Gambians are basking in a new age of free speech and expression. This freedom has experienced a few hiccups, most notably in June 2018 when armed policemen opened fire on peaceful protesters in a Gambian village, killing three people

Prior to winning the Gambian elections, Adama Barrow was party to the coalition agreement to spend only three years in power, despite the constitutional mandate of five years but there are already strong indications that he will not keep this promise. He has even pointed to his recently released National Development Plan that demands a timeline of 2018 to 2021 as enough reason why he will need to complete the stipulated 5-year tenure. The coalition is regarded to have caved in on itself with the President’s last cabinet reshuffling.

The Gambian President’s tendency to “recycle” actors from Jammeh’s regime has not gone unnoticed. Many high-profile public service officials that have confessed to carrying out illegal activities under Jammeh remain in government. However, in September 2019, the Adama Barrow government following the recommendation of the Janneh Commission placed a ban on Yahaya Jammeh and several of his top government officials that prevents them from holding public office for life. The Commission also recommended that the former president’s assets, both within and outside the country, be forfeited to the state.

Prior to winning the Gambian elections, Adama Barrow was party to the coalition agreement to spend only three years in power, despite the constitutional mandate of five years but there are already strong indications that he will not keep this promise

Only time will tell the impact Adama Barrow’s presidency will have on The Gambia and its people. Depending on whether he keeps his word or not, he might be rounding up his tenure or only just beginning.

Teniola Tayo is a Consultant with WATHI and a post-graduate student at the London School of Economics and Political Science where she is pursuing the MSc. Development Management. She has worked in development in both the public and private sector, including a political appointment as a Senior Legislative Aide to the President of the Nigerian Senate.