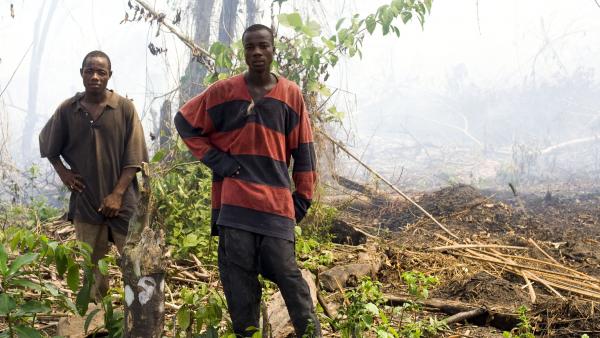 Reading through the 2009 final report of the Truth and Reconciliation Commission of Liberia Diaspora Project, A House with Two Rooms, it is apparent that the issues documented here still remain crucial in the October 10th, 2017 election in Liberia. Healing from the horrors of “a bloody coup d’état, years of military rule, and two violent civil wars”, takes more than just time. The 610 paged document draws on an analysis of over 1600 statements, interviews and testimonies from  public hearings drawn from the Liberian diaspora. One key element which the diaspora noted as having slowly boiled into the years of trauma, war and military rule is the plundering of the country’s many natural resources by foreign interests, most notably the U.S., and enabled by Liberia’s rulers.

Followers of the upcoming elections must be watchful  for candidates who have a  strong policy programs for fair land-ownership rights as it is a driving force in many global conflicts. Since the 1950s, the government of Liberia treats un-deeded land as public, thus managed by the State. Liberian citizens who claim ownership based on customary land rights, (which is the vast majority), are  dramatically weakened by such treatment. This causes unquantifiable expulsions, including contributing to the civil wars, and enabling the State to basically do whatever it wants. According to a “‘Legal tools for citizen empowerment “ publication in 2014, by Ali Kaba and Gaurav Madan, through a major project funded and run by the Sustainable Development Institute, Namati and UK aid, Liberia is now estimated to have “half of the country’s land mass promised to foreign companies and investors”.

Liberian citizens who claim ownership based on customary land rights, (which is the vast majority), are  dramatically weakened by such treatment

This is a common trend in the 21st century amongst newly opened countries to global trade who are recovering from war or recently had sanctions lifted after decades of repressive military rule. Liberia is now  exposed  as ever to  resource exploitation, which could lead to even further expulsions of local peoples. According to Saskia Sassen in a Guardian article in 2017, one only needs to look at Myanmar’s Rohingya expulsions as an example of this global expulsion trend, obscuring corporate land grabs with the label of “ethnic and religious tensions” or “ancient ethnic or tribal hatreds”. An all too familiar story: many diverse groups of people mostly live peacefully together until the state suddenly sells their land and expulses them from their customary lifestyles, then the state acts surprised when people rally around the community they belong to which offers the most “protection”, and begin fighting each other for whatever resources, food or land is left.

According to the document by Kaba and Madan, “A Land Commission report into Private Use Permits (PUPs) showed that over 70 per cent of Liberia’s land is currently under some form of concession, conservation area, or private claim, including land grants (De Wit, 2012), which are often negotiated by the state without the free, prior, and informed consent of affected communities.” Fair land rights for the Liberian people has an enormous capacity in building towards a healthier civil society. Furthermore, in the 2013 policy recommendations,  Kaba and Madan helped draft through the three year long project which became a key advisor for the current Land Rights Act. This historic Land Rights Act first draft was presented to the President Sirleaf in 2014, yet has been stalled in legislature ever since, both inflaming decade long tribal tensions and rendering people more socially and politically powerless if they have few legal enshrined rights over their historic land. This is one of the key struggles in which the Liberian people must urge their leaders to focus on in 2018, and ultimately vote upon in the 2017 election.

The European Union and civil society players key in drafting the Land Rights Act have spoken about the question of land ownership in an editorial of the European External Action Service, about their three year project launched in 2017. According to the editorial, “Views among civil society actors, International Organizations and Liberians themselves are that the Land Rights Act will contribute to the consolidation of peace and democracy and provide opportunity for economic growth with protection for investors to invest in Liberia. Farmers will specially benefit from the Land Rights Act and will be enabled to focus on sustainable food and nutrition security in Liberia by increasing their production to feed the growing Liberian population.” Unfortunately, the Land Rights Act continues to be stalled.

For these reasons, it is apparent that this Land Rights Act has the capacity to make or break the next decades of Liberian social, economic and political life. Without addressing these issues properly, there is a potential for Liberia to repeat history, one that will be  partially detailed in the Diaspora Truth and Reconciliation Report, and a history nobody should want to see repeated.

Rahel Losier is studying political science and sociology through an Erasmus Mundus masters program based in France, and is currently doing a semester in Dakar at Université Cheikh Anta Diop (UCAD). She is an intern at WATHI.