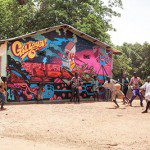 Wide Open Walls was founded by Lawrence Williams, one of the owners of Makasutu, a conservation project home to a set of magnificent river lodges at Mandina in The Gambia, West Africa. The area surrounding Makasutu is home to a number of small villages falling under the Ballabu conservation project, set up to conserve the natural and cultural beauty of the area. Lawrence, a keen artist, began working with local artist Njogu Touray on murals within these communities and began to see the potential to expand the project into something more, something lasting that could both function as a valid art installation in itself and at the same time a means to generate income for the rural communities who host the artwork. Wide Open Walls is a democratic and interactive street art project bringing artist of the world to celebrate through art, all good things in life, environmental awareness, peace, love and respect for our cultural values. 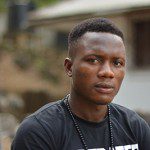 Alphanso Appleton, a local, a surfer, and now an activist uses graffiti to give his country a meaningful facelift. Appleton’s painting is part of a first-of-its kind art project that took root in Robertsport, Liberia, in June. It began when a group of locals, who, led by Appleton, repainted internationally acclaimed artwork on war-ravaged spaces around the town. And the project is unique in that none of them are artists — at least, not in the traditional sense. Prior to the civil war, [Liberia] was a very loving country and a peaceful land,” says Appleton. “But then the war came, people died and a lot of buildings were destroyed.” The colorful anomalies quickly became popular attractions, as locals came by to admire them. Many took selfies, which quickly turned up on Facebook in people’s profile pictures and cover photos. This press represented small, but significant victories for Appleton, who sees the murals as an emerging point of local pride for the city. 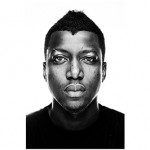 Seven grew up in Festac, a lively neighborhood in Lagos where some of his earliest work still marks the walls. Despite the negative connotations surrounding graffiti Seven was undeterred and knew a career in art was his future. He’s made a name for himself as a leading graffiti artist and has created art for big names clients like Guinness and Kia. He now has a new, two-fold agenda: to encourage upcoming artists and to change the perception of graffiti in the minds of Nigerians. His commitment doesn’t end there. He’s partnered with other artists in Lagos to create ‘Art for a cause’ an initiative geared towards injecting creativity into learning spaces for kids. “We visited a couple of schools and we saw the walls were plain and dirty,” he says. “We decided to go to these schools, engage the kids and paint educative artworks on the walls which creates some kind of subconscious and awareness in them.” 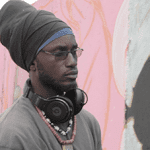