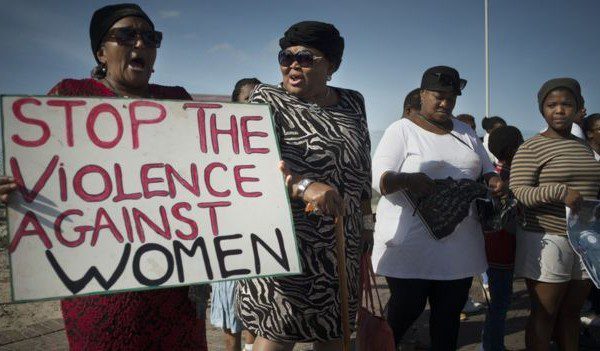 Domestic violence in South Africa needs to be taken more seriously. However, domestic violence is a worldwide issue. I was a bystander in a domestic violence case in France of somebody close to me. At first, I didn’t know what to do despite having tried to engage in discussions with her about it. However, I could only really help her once she sought my help. I ended up intervening when she was willing to end the relationship but she didn’t know how. We carefully made a plan together. During three and a half years in an emotionally abusive relationship, I would find her crying almost every weekend. Now she is happily in a healthy relationship with someone else, thanks to her decision to speak up and to having supportive people around her. From that time on, I decided to focalise on this issue.

Did you know that 30% of violence in South Africa is domestic in nature? According to the Government Gazette, the remedies South African policies have instituted have proven to be ineffective. Most approaches fail to overcome such systemic violence, however, I propose that conflict theory may better address the symptoms and root causes of domestic violence. The problem begins at childbirth, through socialization, individuals are forced to incorporate wider norms of masculinity and femininity, ultimately promoting tension and conflict. If conflicts arise from this system, why does it continue and who benefits from it? This system promotes the domination of a masculine control on women and to some extent, justifies or reinforces gender based violence and domestic violence.

The problem begins at childbirth, through socialization, individuals are forced to incorporate wider norms of masculinity and femininity, ultimately promoting tension and conflict

Why did South Africa develop the Domestic Violence Act? It was a response to the increasing numbers of victims of domestic abuse. However, the Act is not sufficient to protect women as it does not undermine the rooted norms of patriarchy, imperialism and racial and economic hierarchies. The Domestic violence Act in 1998 defines domestic violence as ‘physical abuse, sexual abuse, emotional, verbal, and psychological abuse, economic abuse, intimidation, harassment, stalking, damage to property, entering into complainant’s residence without consent’.  Yet, to understand domestic violence beyond the definition, we must examine larger norms and the construction of gender roles within a society.

What are the gender norms required for a patriarchal society? « Emphasized femininity » is characterized by women who are supposed to soften the male roughness by being loving and tender. Feminine characteristics are submissiveness, passivity, and nurturance. Masculinity refers to dominance, aggression, assertiveness, and self-assurance. Men are supposed to be heads of the household and breadwinners. This authorized dominance can lead to sexism, a belief that one sex is innately superior to the other one. These aspects are reinforced and legitimated in a patriarchal society, a form of social organization in which men dominate, oppress and exploit women. The social spheres where gender based conflicts frequently arise includes: paid work, the household, the State, violence, sexuality where men have more authority on how sexual relationships should be conducted, and finally culture, such as Lobola, a type of dowry in South Africa. When these gender roles are challenged, vigilant violence appears to reassert male power and privilege.

The Apartheid also systematized a context of legitimized violence of a dominant group over the disempowered, which permits more sexual violence as well

What are the factors driving domestic violence? Income disparity is one. If a woman works, an abusive partner may try to minimize her power, especially if she earns more than he does. Larger global norms such as imperialism and the South African post-Apartheid context of poverty are also conducive to domestic violence. We can draw a link between intimate partner violence and lower socioeconomic levels. Poverty leads to stress, where victims have less recourse to deal with it, so they may turn to violence. The Apartheid also systematized a context of legitimized violence of a dominant group over the disempowered, which permits more sexual violence as well. In South Africa, young men, especially those who have experienced family violence, may see violence as a legitimate and accepted act to solve problems.  It appears as essential in affirming their masculinity.

Within South Africa, female victims are not able to respond to male perpetrated intimate partner abuse. The normalization of domestic violence implies that the victim first reacts and then she habituates to it, and this cycle of behavior becomes routinized in the relationship. Victims are caught in the cycle of violence: tension building, the explosion (the actual abuse) and the phase where the abuser apologizes. Women in these situations tend to see themselves as having provoked the violence.

However, the role of a bystander can be a pivotal point in helping a woman in a domestic violence situation emancipate herself, but often she must solicit help

They also may use the discourse of perfect love, perfect partner. They would recognize the dual masculine identity, from the prince to the beast, such as in many fairy tales. Often, alcohol sparks the disruption from a normal state. Women describe it as if their partners lose control, they don’t truly mean to hurt them. The cycle of violence perpetuates because women have already bonded strongly with the ‘prince’ side of their abusers. If male bystanders help victims, women may get more beaten due to accusations of infidelity. The women might have transgressed certain social norms, and therefore challenged the male’s dominance. However, the role of a bystander can be a pivotal point in helping a woman in a domestic violence situation emancipate herself, but often she must solicit help.

The State became involved in the Domestic Violence issue by creating the Domestic Violence Act in 1998. South African Law commission’s project was to reunite a number of feminist lawyers and experts in the area of domestic violence to review the legislation. The product of this committee is the DVA: Domestic Violence Act. This Act of 1998 defines « Domestic violence » as a relationship between complainant and respondent. The behavior involved imposes emotional, verbal, and psychological abuse, causing emotional pain, and is also characterized by obsessive possessiveness or jealousy. The purpose of this act is to afford victims maximum protection from domestic abuse that the law can provide and to introduce measures which seek to ensure the states give full effect to the provision of the Act. Under DVA, victims can apply for a protection order.

Police should help complainants and inform them of their right to apply for a protection order, in the form of a notice. Members of the SAPS (South African Police Services) are obliged to execute their duty in terms of the Act. The Independent Complaint Directorate (ICD) must be informed of any such failure reported to the SAPS. The South African constitution established the Commission for gender equality (CGE) which promotes the attainment of gender equality and recommendations regarding legislations which affect the status of women. Even though, the Domestic violence Act and CGE challenge the long history of neglect of domestic violence, it has not destabilised the hegemonic national gender machinery in place, nor alleviated the cycle of poverty in many townships, which exacerbates domestic violence.

Even though, the Domestic violence Act and CGE challenge the long history of neglect of domestic violence, it has not destabilised the hegemonic national gender machinery in place, nor alleviated the cycle of poverty in many townships, which exacerbates domestic violence

The Domestic Violence Act appears not to be sufficient to protect women in South Africa (CGE). Some members of SAPS are not willing to apply the Act. As a consequence, some policemen are reported to the ICD. Infrastructures and places of safety in police stations are limited. Reports from the provinces of Gauteng and Eastern Cape state that safe houses are not always convenient for victims and offer limited places. A report from Mpumalanga, another province of South Africa shows that the Dientje police station does not have a place of safety at all so, victims have to find arrangements with relatives to find temporary accommodation. Moreover, the police station in Mthatha, the main town of the Eastern Cape province, does not have rape kits. There is an important staff shortage especially of magistrates, which implies delays in processing court order forms. There is a lack of resources in police stations, such as lack of police vehicles, fax machines and photo copiers.

Many women lack basic access to the law. Furthermore, police stations are only found in white suburbs, and not in black communities. Township and village victims have to take a taxi or a bus which is expensive and has limited services. The cost of accommodation and separation might be too expensive. During interviews, twenty three women mentioned police negligence and difficulties such as finding money for documents and a lack of information. The DVA offers only two languages and is not available in braille. Sign language interpreters are not readily available at courts. The problem of domestic violence must be taken more seriously to motivate the political will to overcome such issues of access and funding.

Some advice could be taken and applied in the whole world: continuous staff training and equipping of all the police stations with an anti-rape strategy, public awareness campaigns about the signs of domestic violence and how to help

Control over women and domestic violence reflect larger norms in a patriarchal system. Even after the implementation of the Domestic Violence Act, domestic violence remains an important issue in South Africa. Some police officers remain incompetent and not willing to apply the Act. Some advice could be taken and applied in the whole world: continuous staff training and equipping of all the police stations with an anti-rape strategy, public awareness campaigns about the signs of domestic violence and how to help. To use the Domestic Violence Act sufficiently, changes in mentality and in norms are required. Police officers, victims, bystanders, and survivors should be ready to challenge these underlying constructed norms of femininity and masculinity to more effectively overcome domestic violence.