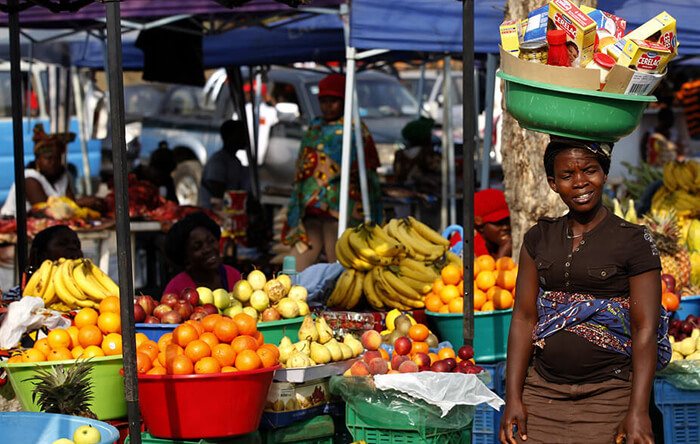 FAO is an intergovernmental organization responsible for achieving food security for all to make sure people have regular access to enough high-quality food to lead active, healthy lives. The Regional Office for Africa works at greater focus on high level dialogue and policy formulation in partnership with regional organizations, as well as greater support to the other decentralized offices through closer oversight and support. With its skill-mix technical teams, it makes a point in focusing on country level activities by the multi-disciplinary teams as well as stronger, specific partnerships with the Regional Economic Communities ( Organization website).

Established in 1983 as a voice of the poor to express their developmental needs and aspirations, CUTS International is a leading Southern voice and face of consumer empowerment through its rights-based approach and activities for influencing the process and content of inclusive growth and development  (Organization website).

SELECTED EXCERPTS FROM THE DOCUMENT

Understanding ICBT in Africa: its definition and magnitude

The first dilemma that must be resolved within the endeavours to respond to ICBT opportunities and challenges of informal trade is to define it in no uncertain terms. Attempts at defining ICBT have not been universally conclusive. However, much thinking has gone into this and not only in the context of Africa but a definition that could be universally applied. In 2014, there was a concerted effort to reach a consensual definition of informal cross border trade (ICBT) by 40 African experts comprising of macro-economists, gender economists, trade economists, gender activists among others who were convened together by UNECA in Lusaka, Zambia.

After considering different definitions used by institutions such as AfDB, COMESA, SADC and ECOWAS, the 40 experts reached a hybrid definition, thus, that “ICBT refers to trade in goods/merchandise and services which may be legally imported or exported on one side of the border and illegally on the other side and vice-versa, on account of neither having been recorded in the official trade statistics nor subjected to statutory border formalities such as customs clearance.”

What is tricky about the above definition is that for the first time we are coming across the inclusion of services in the definition of ICBT. While this is a growing area of research, services involved in ICBT could include practices such as informal exchange of money across borders, which is part of financial sector services. Others may include workers from one country crossing over to provide labour services in different sectors e.g. agriculture or construction without necessarily going through the set immigration procedures of the respective countries.

What one can conclude from this definition is that ICBT does not have to be illegal. It is simply informal in terms of the procedure (failure to record the goods in the official trade statistics or subjecting them to statutory border crossing formalities). In this sense, we must draw a distinction between informal cross border trade (ICBT) and what we can call ‘criminal cross border trade’ (CCBT). In this case, CCBT refers to the trade in ‘illegal goods’ such as arms, drugs or human trafficking, which are serious crimes and are deemed socially undesirable by the general public, whereas ICBT involves import and export of ‘legal goods’ outside the official channels (Meagher, 2003).

Dimensions of magnitude and determinants of informal trade growth in Africa

The magnitude of ICBT is known to be significantly large in Africa. For instance, 30 to 40 percent of the total intra-SADC trade has been estimated to be in ICBT (Afrika and Ajumbo 2013) and ICBT generates nearly US$18 billion a year for the players (UN Women, 2011). In some African countries, the flows through ICBT do account for 90 percent of official trade flows (UNECA, 2013). Lastly, ICBT has also been estimated to provide employment to 20 to 75 percent of populations in most African countries (UNECA 2010).

The magnitude of ICBT is known to be significantly large in Africa. For instance, 30 to 40 percent of the total intra-SADC trade has been estimated to be in ICBT (Afrika and Ajumbo 2013) and ICBT generates nearly US$18 billion a year for the players

There are regional variations on the magnitude of informal economy; but again, within specific regions there are variations in the magnitude of informality between member countries. The magnitude of the informal economy in any country and/or region present two facets: the size as a percentage of GDP or of employment in the respective regions or countries. When measured as a share of GDP, much of the empirical work tell us that the average size of the informal economy is larger in Africa where it comprises 42% of GDP, followed by Latin America at 40% of GDP, Asia at 35%, the transition economies of Europe and the former Soviet Union at 20-25%, and the OECD countries at 2% (OECD, 2006).

Poverty Reduction Dimensions of ICBT: The growth of ICBT in Africa tends to be associated in most cases with increasing poverty and weak employment conditions. ICBT is not only a common feature of the growing intra-Africa’s trade, it has been incentivized over the years through longer periods of dysfunctional policies that have resulted in shrinkage of formal sector of the economy (Ogalo, 2014). It is further observed that the sole reason for women engagement in ICBT is economic reasons; that is, to earn income and sustain their families due to relatively low levels of formal employment opportunities (Jawando et al., 2012).

What is striking about informal trade is that it includes a disproportionate number of young people most of who are women and others from disadvantaged groups. For example, in some sub-Saharan African countries, 84% of women’s employment is in informal employment (OECD, 2006).

The Push and Pull Factors into ICBT

Role of women in ICBT in economic growth and human development

Usually, we require adequate statistics on women in ICBT to be able to measure their ‘contribution’ to development – both in terms of economic growth and overall human development. The contribution of women in ICBT to economic growth can be assessed through a prism that combines self-employment, the employment of extra labour, contribution to value addition in trade; government revenue in form of taxes and duties, and production of goods and services traded by the country.

The contribution of women in ICBT to economic growth can be assessed through a prism that combines self-employment, the employment of extra labour, contribution to value addition in trade; government revenue in form of taxes and duties, and production of goods and services traded by the country

On the other hand, the specific contribution of women in ICBT to human development can be assessed by considering the effect of expenditures of income earned from ICBT on life expectancy, adult literacy levels, and income per capita at national and household levels. On this note, ICBT income expenditures on health, food and nutrition are good proxies of assessing the contribution of ICBT to longevity. Similarly, ICBT income expenditures on education will often make a positive contribution to national and household-level literacy. Finally, the increase in per capita income buoyed by rising ICBT incomes reflects the power that women have over resources needed for a decent living.

Approaches to formalisation of informal trade

Under this approach, the focus is to highlight the main dimensions/provisions in the policy architecture of a country by considering the established policies that unambiguously facilitate/promote the creation, preservation and sustainability of small enterprises and decent jobs in the country or within a REC context. Some of the elements that can be considered in a country’s or a REC’s policy framework to support transition to formalisation could include creation of macroeconomic policies that directly seek to promote sustainable small enterprises, business confidence, and addressing inequalities.

Policies on trade, industrialisation, taxation, infrastructure and sectoral policies e.g. agriculture and manufacturing policies have been used to promote employment, enhance productivity and facilitate structural transformation processes. These have the effect of expanding the formal sector of the economy and expanding potential for formal job creation. Recalling that one of the reasons given for the expanding size of the informal economy was the inadequate opportunities for employment in the formal sector, such policies could be well targeted to promote growth of the formal sector and in effect reduce the attractiveness of the informal sector including informal cross border trade.

These are partnerships involving formal private sector, non-governmental organization and development partners’ strategies and programmes fostering formalisation of informal trade. The domain of transition to formalisation need not be a strictly government affair. Formal private sector organization also in a bid to expand their market and within the context of their own sustainability have also come up with products and market linkage relationships with informal traders as their clients.

The domain of transition to formalisation need not be a strictly government affair. Formal private sector organization also in a bid to expand their market and within the context of their own sustainability have also come up with products and market linkage relationships with informal traders as their clients

Within this context, therefore, the transition to formalisation of informal trade could be achieved through multiple strategies and programmes developed by formal enterprises, NGOs and development partners towards addressing some of the critical needs and gaps of the informal cross border traders such as access to finance, access to technical information (health & technical standards), access to market information (inputs, product). The focus of this study is therefore to highlight with examples some of these strategies and programmes in different countries in Africa and outside Africa including their positive socio-economic impacts.

Measures promoting rights and freedoms of informal traders within country or regional contexts could include reference to specific laws and policies, but more importantly actions by trade unions or confederations that are promoting the organization of informal traders. Such measures have proven successful in supporting formal measures that enable informal traders and employers to work together to realise the fundamental principles, rights and freedoms of informal workers and employers. Some of these will invariably include addressing unsafe and unhealthy working conditions that often characterize work in the informal economy. In some instances, they have helped to promote extension, in law and practice, to all workers in the informal economy, the social security, social contributions, coverage of social insurance, maternity protection, decent working conditions and a well-thought out minimum wage.

Incentives and compliance-based approaches to formalisation

Firstly, as Africa aspires to achieve objectives of Agenda 2063 of transforming the continent in a healthy, wealthy and prosperous region, the business-as-usual option needs to be reformed to address the existing negative impact that informal trade can cause on formal businesses (e.g., unfair competition), on informal businesses themselves (e.g., the inability to benefit from significant growth opportunities accessible only by formal businesses such as formal credit), on customers (e.g., no guarantee that health and safety standards have been followed) and on governments (e.g., taxes owed are not collected).

Secondly, the option of abrasive eradication of informal traders is also not a feasible option and is equally unacceptable because part of the reasons for the emergence and growth of informal economy results from dysfunctional policies and poor governance and painful structural adjustments that often shrink opportunities for formal business and jobs creation in the first place. It is a self-defeating approach to try and repress informal entrepreneurship as it is precisely the entrepreneurship and enterprise culture that any government wishes to nurture.

Thirdly, full or complete de-regulation is deemed unacceptable because it results in a levelling down rather than levelling up of working conditions. Fourthly, and hence we conclude in this paper, facilitating formalisation is the only viable policy option for Africa’s transformation agenda to realise its objectives.