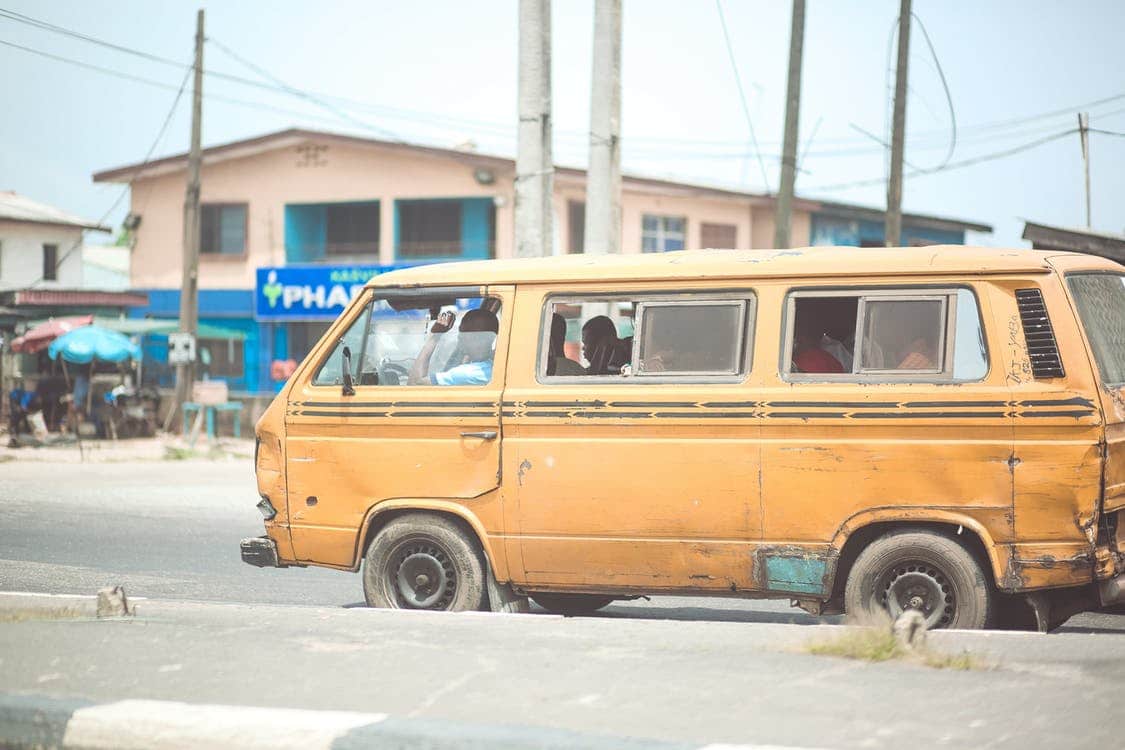 Danfo Tales in the Big City

Tomi Wole writes about her experiences taking the popular mass transport yellow buses in Lagos, also known as “danfo”. She paints an interesting picture of her struggles in trying to navigate the complex city.

I’m ashamed of how well I know these… but honestly, I could go on.

My Danfo tales are endless and I’m sure I am not alone. I thought it’d be interesting to share some of my experiences.

Anytime I experience something odd or exciting on the bus I feel as though it was played out just for me. LoL.

Sometimes I’m like “nahhhh this has to be prank; this can’t be happening”.

But then I’ve never heard anyone scream “punked!” after an unbelievable episode in a bus.
When I’m asked how I’m getting home I respond saying: “I’m taking the bus.”

I call Danfos “The Bus” and it throws people off because apparently this is somehow wrong. But please, isn’t it a bus?

Apparently “bus” and “the bus” are two very different vehicles.

Just thought to put that out there.

Okay let’s get to it!

Me: Hello everyone, I am an Abuja girl turned Lagos mobility hustler and I actively used the bus to and fro my workplace for about 2 years.

Group: Hello Lagos Mobility Hustler (Don’t even know how I came up with that name).

Like I said, my bus tales are endless so let’s begin. Here are but a few interesting tales from my bus hopping in Lagos …

My first day of work in Lagos, I took “the bus” home and…you guessed it, I got lost!

Back track: I was told NEVER to admit that I did not know where I was going in Lagos. This was one of the MAJOR tips my well-wishers gave me when I was making the big move to Lagos.

I was meant to make a simple trip from Lekki Phase 1 to Ikate. If you know this route, you would know that this is not rocket science. Sigh.

But give me a break, it was my FIRST day mobility hustling in Lagos, FIRST!

Anyway, I got on the right bus, and was on the bus for a while before I realized we had gone past everywhere that looked familiar. So I had to do it; I had to break the “Even if you don’t know where you are, act as if you do” rule. I turned to a brother on the bus and told him I was sure I had missed my way.

He quickly beckoned on the driver to stop the bus and he got off with me.

He asked me where I was headed, and because the traffic was terrible, he walked me all the way back to my stop and even helped me cross the road and when he was sure I was safe, he went on his merry way.

“Hmmmn which should I tell?” Okay…

The first time I was going to take the bus from Ikeja to the Island, a colleague accompanied me. He told me the names of all the stops as we went along.  And I was like ‘cool cool, this all seems pretty straight forward’.

There was a particular stop called “Berger” that was an interim but vital stop on my journey to Lekki. I later came to realize that there were actually two stops with the exact same name. And they were in opposite directions.

I’m sure you’ve guessed it; on the day I decided to make the trip alone, I took a bus going in the wrong direction :).

My first day of work in Lagos, I took “the bus” home and…you guessed it, I got lost

Again, I had to break the “Even if you don’t know where you are, act as if you do” rule. I turned to a brother on the bus (later turned Angel No. 2) and told him I was sure I was on the wrong bus. He agreed and got off with me at the next stop. He assisted me to cross the crazy Lagos – Ibadan Expressway, took me to a bus park, put me on a bus to Lekki and went on his way.

I have this habit of never having enough cash on me. I’m sure you know where this is going. Lol. There are actually two stories relating to the absence of cash.

First One: A friend had dropped me off at the second roundabout in Lekki and I was to take a “N50” trip to Ikate.

Anyway, I get on the bus and a few minutes before I get to my stop, the Conductor starts asking for money. I boldly look into my bag only to find N30. [I’m ashamed as I type this]

After considering disappearing into thin air, I proceeded to beg the conductor to let it slide [The HORROR!]; explaining that I had only N30 on me and convincing him that it wasn’t intentional.

I could feel the stares and murmurs from other passengers. I imagine they were saying things like, “This sisi enter bus, she no get money”. *Sigh* anyway, because the Lord is always on my side, the Conductor goes; “Na because you be fine geh oh, oya give me (Just because you’re pretty, I’ll take the money)”, and lets me go in peace.

I successfully make a trip from Ikeja to the correct Berger stop; this time only to realize that all the cash left on me is only enough for a trip to VI and not as far as Lekki. And if you know the Berger I speak of, there is no ATM in sight. I decide to take the plunge. And a stupid plunge at that. Instead of taking a bus going into VI so that I can get to an ATM, I take a bus going to Lekki, not just that, I stupidly go on to ask to be dropped off at Falomo. [Wait, was I on crack???]

Anyway, I got dropped at Falomo and because I had no money, I proceeded to walk; not sure where to. So, I’m walking, walking, and I’m walking, and beginning to realize how stupid this decision was, when I saw the head lamps of a sienna flash at me.

Everyone knows you should never get in a stranger’s car but at this point as soon as I saw the light flash I said to myself: “God I’m going to get in this vehicle and you are not going to let them kidnap and kill me because this is a really peculiar case and I don’t deserve to walk to Lekki”.

Simply put: I was prepared to accept the ride even before it was offered.

I walked towards the vehicle, the glass rolled down and behold, two men poke their heads out and smile. They said to me, “Your bright orange top caught our attention, plus you look like you shouldn’t be walking”.

In my head: “God you have a great sense of humour; two men? In a kidnap friendly vehicle? Really? – I’m still getting in though”.

Summary – they offered me a ride, I got in, and I actually told them the legit story about how I found myself walking on Falomo. They were nice. They laughed. They offered to take me home. But then I had a rethink so I asked them to drop me at church so that I could thank God for spearing my life. They did, and they gave me N500 to make the rest of my trip.

Reflecting now, all these tales haven’t really been about what the Danfo community has done to me, they are more about where my poor choices have led me and how God has saved my butt every time. LoL!

Anyway, I got dropped at Falomo and because I had no money, I proceeded to walk; not sure where to. So, I’m walking, walking, and I’m walking, and beginning to realize how stupid this decision was, when I saw the head lamps of a sienna flash at me

But I promise the Danfo community has been brutal to me a few times:

This post does no justice to 2 years of the danfo mobility hustle.

Tomi is a Human Resources professional with a passion for exploring and analyzing human behaviour and interactions. This passion inspired her to start a blog in 2015 and talk club in 2019. She enjoys using her professional knowledge and real-world experiences to develop content as a freelance writer.