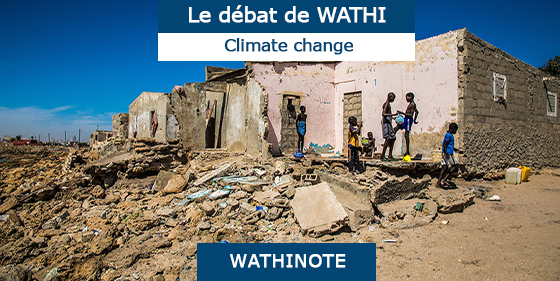 Nigeria had experienced many setbacks that resulted from environmental hazards, some being natural and others man-made. Natural hazards include storm, erosion, drought, diseases and flooding. On the category of man-made hazards are conflicts, oil spills and accidents. Flooding is a natural disaster that frequently impact negatively on the inhabitants of the coastal region of Nigeria. Climatic change impacts are believed to increase frequency of occurrence of floods.

It was estimated that with a 70cm sea level rise, the number of people at risk of annual flooding could increase from 46 million to 90 million.

Many families in coastal areas are vulnerable to the impact of climate change because of their low adaptive capacity to climate change.

The consequences of flood due to climate change include reduction in fish catch, erosion of human habitat and reduction of income of fishermen. Flood also affects health resulting in outbreak of diseases like cholera, dysentery, malaria and yellow fever and increases the chances of famine in areas with inadequate coping systems.

It was estimated that with a 70cm sea level rise, the number of people at risk of annual flooding could increase from 46 million to 90 million

The various impacts of flooding have led the fishermen to adopt different coping mechanisms such as moving to other place of abode, temporary relocation, moving to other fishing sites, regular dredging of rivers and improved control of river siltation. Many fishing communities in Lagos live in riverine areas thus the fishermen should be educated on the signs to watch out for and preventive measures to take in event of flooding. The government had taken some combating measures such as digging of boreholes, wells and afforestation of sand dunes delineation of flood and erosion hazard areas.

Majority (76%) of the fishermen encountered loss due to flooding. The loss included destruction of the fishing implements, disruption of the children’s schooling, higher risks to environmental pollution, and reduction in fish catches and consequently family income. Flooding occurs during the peak of the rainy season between the months of July and October. This results in decline of fish catches which tend to be higher during the dry season when the volume of water is low.

If fishermen could be forewarned of potential floods then they could take appropriate precautionary measures. The government has not provided any support during the past period of flooding.

Sixty-four percent of the fishermen had relocated. Only 16% temporarily relocated and then returned to the fishing village afterwards. In the same manner, 28% of the fishermen moved to another fishing site. Most of the respondents would not like their children to continue with fishing and will opt out if they get alternative means of livelihood.

The fishermen’s families are indeed suffering seriously as a result of the pronounced negative effects of the flooding. The government and other stakeholders should devise appropriate ways to mitigate the negative impact of flooding on the fishermen’s lives.

The research findings showed that the majority fishermen are still young consequently it can be deduced that they have the potential to develop and sustainably run the fishery. However flooding is currently a major threat to the fishermen’s livelihoods especially the resultant decline in fish catches which then threaten family income and the prevalence of water borne diseases.

Based on the findings of the study, the following recommendations are made: The fishermen in the community need financial assistance from the government to enhance large scale operation.

There is a need to educate the fishermen on possible climate change to forestall flooding disasters.

The non-governmental organizations should educate the fishermen on the coping and control mechanisms to use to combat the adverse effects of flooding.

The government and non-governmental organizations should provide the members of the community with affordable health services for treatment of water borne diseases.

There is also the need for provision of an alternative skill development programme for the inhabitants.