Generally speaking, people with disabilities have an easier time finding participatory options in disability sport and adapted physical activity. However, it is additionally true that there are still many barriers to participation. For instance, certain infrastructural policies, lack of technology and equipment, as well as general social beliefs and attitudes towards those with disabilities. Lack of experience or awareness around the issue of disability and sport accounts for much of the barrier – on the individual levels of those directing sporting institutions as well as the people involved in the lives of those with disabilities. Every person with a disability will not experience the same barriers, just as every region, country, and society will be able to get past different barriers in engaging with disability sport.

While integration is a great step, and one which is needed for the enjoyment of sport of those with disabilities, there is more to be done that of inclusion

The progress which has been made thus far in disability sport has been in that of integration: providing platforms for those with disabilities to have a stage to compete and participate on. These types of organizations and events include such things as the Paralympic Games, Deaflympics, and Special Olympics World Games. These integrating opportunities offer people with disabilities the chance to compete in sports with others who have disabilities, aimed at gaining all of the traditional value, enjoyment, and benefits from sport. The idea of integration is creating a unique platform for those to participate in, just as typical sports occur. While integration is a great step, and one which is needed for the enjoyment of sport of those with disabilities, there is more to be done that of inclusion.

Inclusion: the next step

By making a difference between integration and inclusion, I mean the following. Integration is providing an opportunity for people with a disability to participate in the same or similar activities as typical sport environments amongst themselves. While the people are able to do the same things, they do it as a sub-group of the larger population. Inclusion would be actually immersing the people with disabilities with the general population in sporting activities. Here is a helpful diagram highlighting the difference: 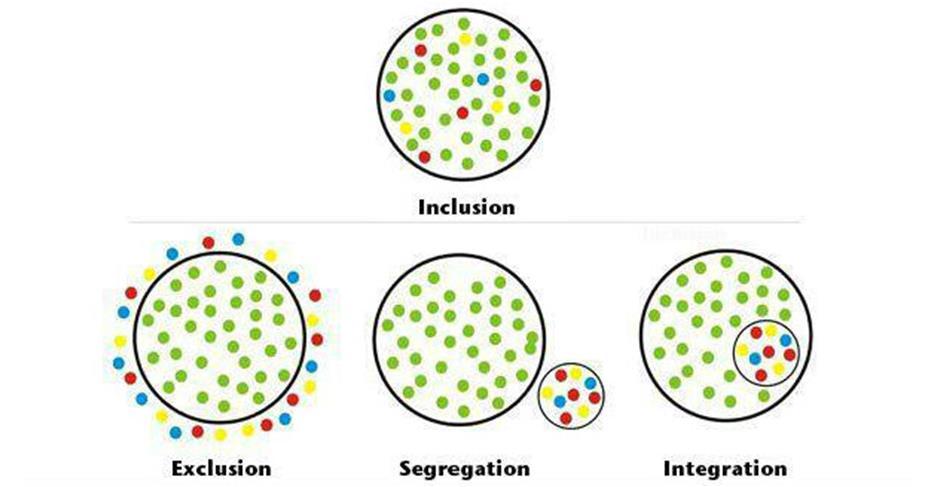 Of course, the nature of sport and competition creates a unique scenario in that not all sporting events are able to be framed as the inclusion model. Competition creates a new sense of who is able to play in certain types of sporting environments – the sport defines who is best, given abilities, and at the highest level of competition, it is this select group able to participate. However, I do believe that more inclusion is possible than what is seen in disability sport today. This could be especially true if we are able to rewrite the dominant narrative of sport to focus on the social and personal benefits of mere participation rather than such a strong focus on winning.