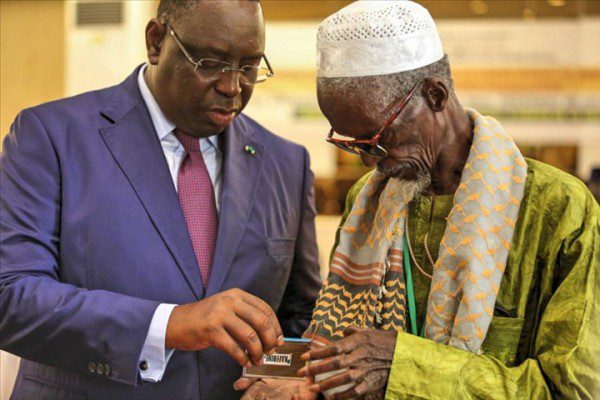 At the Social Promotion and Reinsertion Center in the Liberté neighborhood of Dakar, director Lamine Diop jumps up from his office chair mid-sentence. The phone is ringing. A woman is calling to inquire about her the status of her application to receive a government-issued “Carte d’égalité des chances,” French for Equal Opportunities Card. A card that, in theory, grants Senegalese nationals with disabilities free access to health services, public transportation and education at the primary and secondary levels.

The applicant dropped off all of her necessary documents last year. But now, one year later, she is still waiting for her card to arrive. “In normal times, before, people received their cards three months after dropping off their documents,” Lamine Diop said. “But since the end of 2017, not a single card has been issued.” Lamine Diop receives at least three or four calls from applicants every day. He said his office has sent about 300 applications to the Ministry of Health since 2017 yet the government has failed to follow up on any of these requests.

Two miles away, in the corner of Souleymane Diop’s office at the Ministry of Health, cardboard boxes are overflowing with hundreds of folders that have accumulated over the past two years. Each one contains a completed, validated application for an Equal Opportunities Card.

In normal times, before, people received their cards three months after dropping off their documents,” Lamine Diop said. “But since the end of 2017, not a single card has been issued

Souleymane Diop is the main point person for the program at national level. Glancing towards the piles of completed applications from his chair, he said his division the Directorate General for Social Action has been unable to access the portion of the state budget devoted to the Equal Opportunities Card initiative during the 2018 and 2019 fiscal years.

During the first five years of the program, more than 50,000 cards were distributed nationwide. But due to budget cuts at the end of 2017, more than half of the program’s allocated funds were stripped away. This brought an abrupt halt to distribution. No cards have been distributed by the Ministry of Health since then, leaving thousands of disabled persons without the financial support granted by the Equal Opportunities Card initiative. “It’s a budgetary problem,” Souleymane Diop said. “The wait (to receive a card) is a bit long that I recognize.”

What is the Equal Opportunities Card?

The legal right for Senegalese nationals with physical, visual, hearing and cognitive disabilities to obtain an Equal Opportunities Card is guaranteed by Article 3 of the Social Orientation Act, passed in 2010. Those who obtain a card and who are deemed through a social inquiry to be at a certain “level of vulnerability” are granted access to significant financial aid in several sectors: health care, education, employment, public transportation, assistive technology.

They are enrolled in the Senegalese universal health care program, meaning all medical expenses are covered by the government; they can take all Dem Dikk buses in Dakar for free; their education expenses at the primary and secondary levels, including school materials and registration fees, are paid for as well.

According to Lamine Diop, the process to obtain a card is straightforward. Applicants are required to drop off several documents at their local Social Promotion and Reinsertion Center, including a medical form signed by a state-certified doctor certifying their disability. A commission comprised of departmental prefects and experts on disability issues then validate the applications before sending them to the national Ministry of Health. It is at this stage of the process the final hurdle when issues arise. “The only problem is the delay in the issuing of the Equal Opportunities Card,” Lamine Diop said. “They can drop off (their documents), but getting the card poses problems.”

A lack of transparency makes it difficult for the public to pinpoint with certainty the reasons for the abrupt halt in the distribution of Equal Opportunities Cards in late 2017, five years after the initiative was first implemented nationwide. Lamine Diop said he has heard the argument from the Ministry of Health that the issue is “a problem with the (printing) machines” a claim that he questions, pointing to the amount of money the government would have to set aside to maintain distribution. Each card grants access to 100 thousand CFA Franc about 170 USD for one year, according to Souleymane Diop.

The state is currently responsible for funding the entirety of the Equal Opportunity Card program’s budget. With cuts to more than half of the state budget reserved for the program during the 2018 and 2019 fiscal years, Souleymane Diop highlighted the need for partnerships with NGOs and private companies for additional funding. “If we had partners, that would add to the state budget and and things would move more quickly,” Souleymane Diop said. “The delays could be compressed.”

A lack of transparency makes it difficult for the public to pinpoint with certainty the reasons for the abrupt halt in the distribution of Equal Opportunities Cards in late 2017, five years after the initiative was first implemented nationwide

On top of budget cuts, the website previously used to send validated applications electronically from departmental centers across the country to the Ministry of Health in Dakar has been malfunctioning for the past two years. This technical difficulty has yet to be resolved, which Souleymane Diop said has slowed down the production and distribution process. The malfunctioning website also resulted in the loss of a large amount of unsaved applicant data, according to Souleymane Diop further curtailing production of the cards.

Making up for lost time

The Directorate General for Social Action is now playing catch-up.  Souleymane Diop said his office is currently exploring strategies to meet the initial distribution goal: 10,000 cards distributed each year now, 20,000 cards by the end of 2019 to make up for two years of halted production.

The ultimate goal is to distribute 40,000 cards by the end of 2021, which would put the program back on track in terms of its initial objectives. But this goal is far from being met. Only 4,000 cards have been produced by the Ministry of Health in 2019, and none have been distributed. If 20,000 cards are to be distributed by the end of this year, radical strategies for acceleration of production and distribution will be necessary.

According to Souleymane Diop, Senegal is the “leader for social protection” in West Africa, specifically when it comes to people with disabilities. Neither he nor Lamine Diop could think of any other West African state that has implemented a program like the Equal Opportunities Card to provide financial aid to one of the region’s most vulnerable populations.

There is political will to promote the rights of disabled persons. We have hope that the budget will be revised to better take into account people with disabilities

But for the time being, the thousands of Senegalese nationals still waiting for their Equal Opportunities Cards are being denied their legal right to financial assistance. They continue to call Lamine Diop’s office each day, hoping for the abruptly-halted program to move forward once again. “There is political will to promote the rights of disabled persons,” Souleymane Diop said. “We have hope that the budget will be revised to better take into account people with disabilities.”

Danielle Kaye is a research intern at WATHI. She studies Global Development and French at UC Berkeley (California), and has spent the past four months living and studying in Dakar.