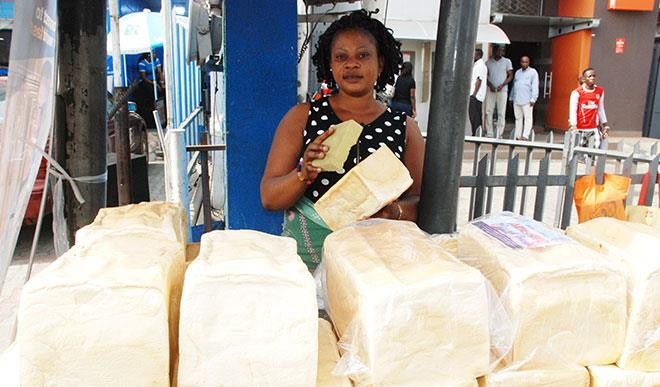 Omotola writes about Agege bread, a popular breakfast staple that is well-known in Lagos. It had been a wonderful Monday. The sun had started setting and dusk had begun to cover the earth with approaching darkness. My sisters and I decided to take a walk to Mile 12. The shady mango trees sang melodious songs, cooling the surrounding with soft life-giving breeze. Shouts and screams of “Buy your bread, hot fresh bread”, and “Aunty, é wa ba mi ra oja na (Aunty please come buy from me)” could be heard. Everyone was talking and the whole place buzzed like a bee-hive.

Then…it happened, at the most unexpected time. A sudden aroma tickled my nostrils. There was no mistaking the smell. I could recognise it any day, anytime the sweet aroma of freshly baked bread. I completely forgot that we meant to just take a walk, and so the bread chase began. Using our noses, we were determined to find this bakery at all costs. My heart hammering against my rib cage, there was no going back. I had reached the point of madness.

We stopped at several shops to ask for directions. We got so many disappointing and rude replies. “There’s no bakery around here”, or “Oh just turn to your left, go straight, you would see it.” One out of many directions that we followed without much success. I remembered thinking, when I first got to Lagos, why everyone was so rude. Insults and abuses meshed in Yoruba flowed freely like fresh air. You would think I would have stopped right, mba (no), there was no going back. We kept putting our noses to good use…et voilà! We finally found it. You should have seen my face! I was filled with pure joy.

Omotola writes about Agege bread, a popular breakfast staple that is well-known in Lagos

“Ehen, ehen, ní bo len lo (where are you going)?” We were stopped right in front of the building by a strangely dressed man.

“Oh! We want to buy bread” I replied, on behalf of myself and my sisters.

All of a sudden, he started to speak very fast Yoruba words that were mostly incomprehensible to me. I was however only able to understand that he was saying the bakery didn’t sell bread to “outsiders”. Wow! What next? All this for the infamous “Agege bread”.

Ehn! After all this stress? I’m not going anywhere.

After much hassle, we were allowed to enter the bakery. The sweet aroma of hot filled the air and intoxicated my senses.

“Give us bread N300”, I said to the man as he was resumed with handling the loaves.

We stopped at several shops to ask for directions. We got so many disappointing and rude replies. “There’s no bakery around here”, or “Oh just turn to your left, go straight, you would see it.”

He gave us a loaf of bread, but without a package. I mean the bread was stark naked, smoking hot. I was blinded with anger. My mouth felt dry, my tongue clinging to the roof. When we refused to accept the bread, he hurriedly dropped it back into the growing pile. He wasn’t even smiling as he continued loading more bread. His uncombed cropped hair looked like an unkempt garden.

Another customer that witnessed the whole thing, told us “You have to come with your polythene bag, you know this is Agege bread. As you can see, I came with my own bag.” I was shocked to say the least. Thank God for one good Samaritan who later bought a bag for us oh. Despite the challenges, the experience was liberating and enlightened me on the popular Lagos delicacy Agege bread. Most importantly, I ate hot freshly baked bread.

P.S. When next you go to a local bakery in Lagos, always go with your own bag, I really don’t want you to repeat my mistake.

Omotola is a final year student at Nasarawa State University where she is pursuing a degree in French. She writes poems and short stories but is also a performance poet. She can also eat bread for a whole week without feeling guilty.