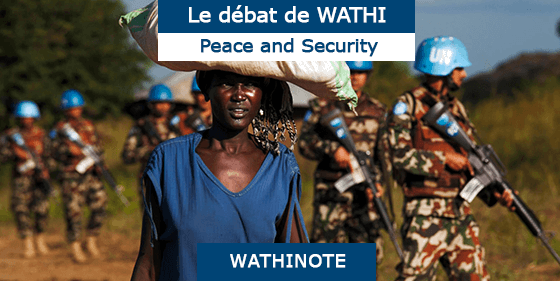 This report analyses experience of women and girls in the North East in order to inform interventions to better alleviate their suffering, facilitate their contribution to lasting peace and mitigate the threat from female Boko Haram members. It examines patriarchal norms the sect exploited to attract recruits and tracks the diverse, changing female roles, as valuable abductees, combatants’ wives and slaves, forced or willing fighters, heads of displaced families, community leaders, mothers, wives and daughters.

It identifies policy priorities tailored to women’s experiences, including immediate humanitarian aid and protection, longer-term reintegration into normal life of those stigmatised by Boko Haram association and women’s roles in a peaceful North East.

Women, Patriarchy and Islam in the North East

Boko Haram’s appeal to some women and the significance of women and girls for the group should be understood in the context of the North East’s heavily patriarchal societies, a widespread adherence to Islamic tenets and challenges to established beliefs and practices. The region’s religious and cultural norms, codified in law, have defined women’s status through marriage and childbearing and largely confined them to a domestic role.

Male dominance has by and large been entrenched in law. Colonialism did little to challenge patriarchal structures in the mostly Muslim north, and independence altered little. At the urging of religious conservatives, Borno and eleven other northern states enacted a stricter version of Sharia (Islamic law) in 2003, with elements of Islamic criminal law. Other provisions reinforced male dominance and further restricted women’s freedoms and rights, including access to education and jobs.

Womanhood has become a central theme in male-dominated political debate, especially with the rise of revivalist Islam and its increasing influence on northern politics.  In what may seem to foreign observers a paradox, many women engage with nonviolent Islamic movements such as Izala, Nigeria’s largest Salafi group. Salafi Islam embraces conservative interpretations, including on women’s public roles and relations with established Sufi Islam and non-Muslims. But it promotes women’s education, Islamic and Western, and allows believers to free themselves from an Islam mediated by established Sufi clerics. Many women find it useful for advancing in their lives on an Islamic basis on their own terms.

Boko Haram leaders made use of the opening created by patriarchy, constraints on women and girls (particularly by patriarchal family members) and grinding socioeconomic hardship in the North East to attract followers. Similarly, the debate over a female’s place and role offered opportunity to invoke religious authority to back up the movement’s claims and made women and girls significant for its rhetoric and actions.

Boko Haram and the subsequent insurgency and counter-insurgency have dramatically changed the lives of thousands of women and girls, casting them voluntarily, by force or for lack of other options into new, evolving roles outside the domestic sphere. Some joined the movement, first as members of a religious community, later as insurgents, while many are targets of its violence. Some fight against it within local vigilante units; others play critical roles in relief and reconciliation, while many displaced by fighting find themselves with new responsibilities.

Women’s and girls’ importance for Boko Haram stems from their roles and how they are perceived in society – both in the North East and in Nigeria as a whole. As wives, they enhance social status and provide sexual or domestic services (sometimes forced), thereby becoming valuable incentives for potential male recruits. Their adherence, willing or forced, to the movement’s version of Islam can also contribute to the spreading of its ideology among other women, but possibly also young men. Women can perform roles very different from traditional stereotypes. As the war evolved, women have become recruiters, spies, domestic labour, fighters and forced or willing suicide bombers.

Targeting of women and girls in certain communities helped to attract supporters, establish a political ideology in opposition to the state and sometimes attack Nigerian institutions in areas where it was perceived it would hurt the most. Boko Haram began kidnapping women and children in mid-2013, initially Christians in the Gwoza area of south east Borno.

On 14 April 2014, Boko Haram seized more than 200 schoolgirls in the town of Chibok, southern Borno state. This became a global affair, with leading female civil society activists throughout Nigeria joining in the Bring Back Our Girls international campaign. There have been many more kidnappings. In April 2015, a well-documented report estimated Boko Haram had taken more than 2,000 girls and young women, most unmarried, over the previous twelve months alone.

Some women have fought Boko Haram as part of the vigilante groups that emerged throughout the Lake Chad basin under various forms, notably the Borno state-based Civilian Joint Task Force. There are presently 122 registered female CJTF (Civilian Joint Task Force) members in Borno state, though more may work with the CJTF informally. Some have received military training, are armed with shotguns and other weapons and fight alongside men, at times in operations with the military. Female vigilantes also guard IDP camps and help identify Boko Haram suspects, for example by examining women and girls at checkpoints to prevent suicide attacks.

Though they may have been obscured by the violent shock between Boko Haram and the state, there has been non-violent female engagement for conflict resolution in the North East. Some women, often from prominent families which valued and could offer daughters an education, have long been active on the place of women in public and private life.

They have usually been so from within Islam, rather than via external critique. That has been so for the Federation of Muslim Women’s Associations in Nigeria (FOMWAN), which has combined propagation of Islam with attempts to improve the socio-economic status of women, youths and children through training, education, health and humanitarian services, micro-enterprise and advocacy.

Women’s Rights Advancement and Protection Alternative (WRAPA) has been active against domestic abuse, female genital mutilation and child marriage and played a major part in the successful defence of two young women condemned to death under Sharia in the early 2000s. As the Boko Haram conflict grew, these organisations have been involved in advocacy, notably over the Chibok abductions. They have found powerful allies in other international and nationwide campaigns.

Together, the insurgency and counter-insurgency have forced nearly two million people in the North East, more than half women and girls, to leave their homes.54 widespread killing of civilians, the destruction of towns and villages by Boko Haram and the military, loss of livelihoods and lack of food in an increasingly ruptured economy are the main factors driving this displacement.

Women and girls in the camps face specific problems. Locked up in compounds where most guards and much of the staff are men, many have experienced sexual and gender-based violence (SGBV) or resorted to “survival sex” with camp officials and security personnel in exchange for food, money or permission to leave the camp. In several sites, sexual exploitation was said to be so frequent that parents preferred to marry their daughters at an early age.

To the Government of Nigeria:

To support women’s economic and social reintegration, as well as enhance their role in building sustainable peace

To the Government of Nigeria: