Accueil English The Islamic State in the Levant and the Conflicts in Syria and Iraq: a Factual Guide – Part 1 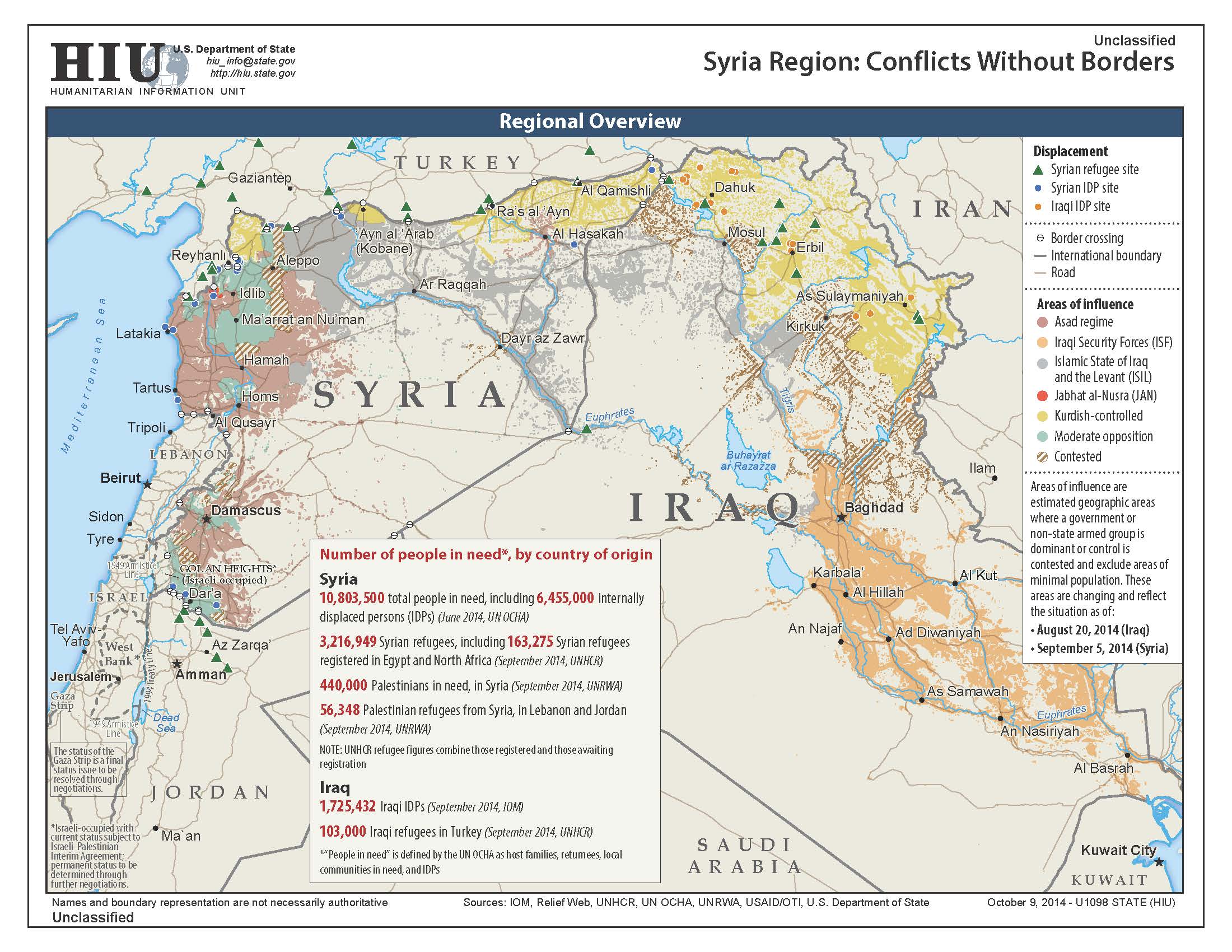 The Islamic State in the Levant and the Conflicts in Syria and Iraq: a Factual Guide – Part 1

The Islamic State in the Levant and the Conflicts in Syria and Iraq: a Factual Guide

ISIL is just one factor in the incredibly complex conflict in Syria and Iraq. Iran and the US, who have been enemies for decades, are both supporting the Iraqi government while supporting opposing forces in Syria. Turkey has sent troops to support Kurdish forces in Iraq, yet is bombing the Kurdish militias in Syria. One cannot look at the conflict in either country or against any one group independently, it is all part of a whole.

Below is the first of a three part series giving a background on ISIL in the context of the conflict in Syria and Iraq. The first section is a brief history of ISIL and a biography of their leader, Abu Bakr al-Baghdadi. The second part will examine the various groups and countries that are active in the conflict. The third part will examine ISIL’s impact in the world and especially on West Africa and the Sahel. It is wise to educate ourselves about a war that directly affects the lives of millions of people around the world and has already spread well beyond the borders of Iraq and Syria.

Reaction to the US Invasion of Iraq

On June 29th, 2014, Ibrahim Awad Ibrahim al-Badri, who goes by the nom de guerre Abu Bakr al-Baghdadi declared himself Caliph. The title Caliph harkens back to Islamic history when the Islamic faith had one titular leader, named the Caliph. By declaring himself Caliph, Abu Bakr al-Baghdadi declared that it was the duty of all Muslims to swear fealty to him and to follow his leadership. The declaration was the culmination of over a decade of conflict starting with the US invasion of Iraq in 2003.

In 2004, soon after the beginning of the Iraq War, a Jordanian terrorist named Abu Musab al-Zarqawi aligned his militant group with al-Qaeda, calling itself al-Qaeda in Iraq (AQI). Abu Musab al-Zarqawi was a hardline Salafist who wanted to turn Iraq into a Salafist theocracy, much like Afghanistan under the Taliban. Al-Zarqawi had a previously established presence in Iraq and was one of the putative links, since proven to be false, between Osama Bin Laden and Saddam Hussein. Al-Zarqawi led a wave of terrorist attacks meant to ignite a Sunni-Shia Sectarian war, allowing the Sunni minority to take over the government of Iraq again and expel US Forces.  In 2006 this culminated with the bombing and destruction of the Golden Dome of the Imam al-Askari shrine, one of the holiest Shiite shrines. Zarqawi’s methods were so brutal, that al-Qaeda number two Ayman al-Zawahiri privately castigated him for his methods.

Following Zarqawi’s death in 2006, AQI continued their bloody attacks against Coalition Forces, Shiites, and any Sunni who disagreed with them. AQI’s brutality and extremist religious views led many Sunni tribes who had been aligned with AQI to switch allegiances and side with the US government in a process called the Sunni Awakening. The Sunni Awakening, in conjunction with a temporary increase in US military personnel in Iraq and a change in tactics was labelled the Surge in Western media. The goal of the Surge was to reduce the levels of violence to a level where political reconciliation could occur. The Surge led to the near defeat of AQI.

While the US Surge was successful in lowering the levels of violence to an amount where Coalition Forces could withdraw from Iraq, it failed in that it allowed the Shiite Prime Minister, Nouri al-Maliki, to govern in a divisive and sectarian manner. This included ordering the arrest of a Sunni Vice President, Tariq al-Hashimi the day that the US Forces left Iraq, on charges of terrorism. Nouri al-Maliki further enflamed Sunni anger by dismissing Sunni officers and ending the Awakening councils. This led many to align themselves again with AQI. By the end of his time in office, Nouri al-Maliki was so toxic to the Sunni and Kurdish minorities in government that a precondition for US airstrikes in Iraq was his removal from power.

Following the start of the Syrian Civil War, AQI entered the conflict by dispatching several top lieutenants to fight the regime of Bashar al-Assad. AQI wanted to take control of Syrian territory to set up their own state. These fighters became known as Jabhat al-Nusra. Jabhat al-Nusra earned renown as an effective fighting force and soon started winning battles and carving out its own territory in Syria. AQI wanted to consolidate those gains and changed its name to the Islamic State in the Levant (ISIL). This name reflected ISIL’s goal of territorial ownership of all of Iraq and the Levant (Syria and Lebanon).

The leadership of Jabhat al-Nusra refused to be subsumed under ISIL and asked al-Qaeda to be considered as the main organization in Syria. This led to al-Qaeda leadership in Afghanistan and Pakistan declaring Jabhat al-Nusra as the Al-Qaeda affiliate in Syria and demanding that AQI stay in Iraq. Abu Bakr al-Baghdadi and AQI leadership disagreed with this command and formally broke off from al-Qaeda. ISIL says this break was legal because ISIL’s leadership never swore an oath of allegiance to Ayman al-Zawahiri and were therefore not bound to follow him. ISIL started to take territory that was originally gained by Jabhat al-Nusra. While ISIL and Jabhat al-Nusra are nominally enemies, they have often joined forces for tactical reasons.

Jabhat al-Nusra carefully vetted foreign fighters seeking to join its ranks, ISIL was more indiscriminate. This allowed ISIL’s ranks to quickly swell and every subsequent victory brought even more fanatical fighters to the organization. With most of their fighters being foreign, ISIL was able to use them to brutalize and control the Syrian population because these fighters often had no local ties and could not speak the language. Between 2011 and 2014, ISIL swept through much of northern and eastern Syria eventually taking al-Raqqah, a Syrian town on the Euphrates River as its capital. ISIL took territory by carefully undermining rebel held towns, mounting spectacular attacks on enemy positions, and by extreme brutality which sowed terror in their enemies.

ISIL came into Western security consciousness in June 2014 when an estimated 1,500 fighters took Mosul, which was garrisoned by 2 Divisions (around 30,000 Iraqi soldiers) of the Iraqi Army. This allowed ISIL to equip itself with state of the art military technology that the US government had given to the Iraqi military. ISIL was also able to loot billions of dollars’ worth of currency from the Bank of Mosul. ISIL’s capture of Mosul further cemented their control of the Iraqi Sunni heartland. They previously took control of Fallujah and Ramadi earlier in 2014. The taking of Mosul allowed ISIL to rename itself the Islamic State and to claim dominion over all of the world’s Muslims.

Currently ISIL claims dominion over most of the Sunni heartland in Iraq, all the way to the Jordanian border, as well as large swaths of territory in central and northeastern Syria. Coalition airstrikes combined with Shiite militias and the Iraqi Army have allowed the Iraqi government to take back the important oil refinery of Baiji, and Tikrit, Saddam Hussein’s hometown. There have been plans to retake Mosul, but Iraqi forces are currently focused on retaking Fallujah. Currently ISIL is fighting a war on multiple fronts against all other actors in the region. While it is possible to degrade and defeat ISIL militarily, unless the ideology supporting ISIL is also defeated, it is always possible that organization will rise from the grave, as it rose from near death in 2011.

Little is known of the man who calls himself Caliph Ibrahim and even less is known of the leadership structure surrounding him. It is thought that most of ISIL’s senior leadership is composed of senior officers of Saddam era security services who were radicalized while imprisoned by the US. Captured documents published by the Telegraph in 2014 reveal a complex organization where each province has its own leader (Emir) and there is a cabinet which aids Abu Bakr al-Baghdadi in decision making. Abu Bakr al-Baghdadi’s level of involvement is also unknown. Is he a figurehead leader with little operational control? Or is he deeply involved in day-to-day operations?

It is difficult, if not impossible to separate myth from reality when talking about Abu Bakr al-Baghdadi. Most of that myth is self-styled. What is known is that he was born Ibrahim Awwad Ibrahim Ali al-Badri al-Samarrai in Samarra Iraq. Details of his life prior to the US invasion of Iraq are sparse. He was the Imam of the Sunni mosque of Haji Zeidan in the Baghdad neighborhood of Tobji. Some say that he was already a Salafist, while others disagree. It is believed that he holds a doctorate in Islamic studies from the Iraqi University of Baghdad, although when he was awarded the degree is a matter of debate. This doctorate is important with regards to his claims of legitimacy as the Caliph. According to Islamic jurisprudence the Caliph must be a man who is learned in Islamic law.

According to official documents, he has two wives, Asma Fawzi Mohammed al-Kubeisi, and Israa Rajab Mahal al-Qaisi who have born a total of six children. It is thought that another woman named Saja Hamid al-Dulaimi was briefly married to him; she was in the custody of Lebanese security forces until December 2015, when she was released to Jabhat al-Nusra as part of a prisoner exchange. Saja al-Dulaimi is related to several prominent al-Nusra members. Lastly he Baghdadi forcibly married, raped, and tortured the American hostage Kayla Mueller, prior to her death.

Sometime in 2004, Abu Bakr al-Baghdadi was arrested by US forces and interned at Camp Bucca. During this time he took the nom de guerre Abu Du’a. Most analysts believe it was during his stay in Camp Bucca that Abu Bakr al-Baghdadi became steeped in Islamic fundamentalism and was radicalized, eventually joining al-Qaeda upon his release. Other sources claim that Abu Bakr was not arrested until 2007, but that view is not supported by US prison records.

After his release from prison, Abu Bakr al-Baghdadi eventually moved to Syria and worked for al-Qaeda in Iraq there. During his time in Syria he impressed senior AQI leaders quickly rising through the ranks. Even though he had a meteoric rise in the organization, it was not until 2010 that he came into the crosshairs of the Iraqi government. In April, 2010 the number one leader of AQI, Abu Omar al-Baghdadi and his second in command Abu Ayyub al-Masri were killed in an airstrike. This prompted an internal crisis and debate about who would lead the organization next.

Abu Bakr al-Baghdadi’s current location and health status are unclear. It is thought that he was grievously wounded in a coalition airstrike in February 2015. Due to the secretive nature of ISIL, the extent of his injuries are not known. Most likely he is still alive although his level of engagement and operational leadership are unknown.

Bennett Kelley-Bell is an M.S. student in International Affairs at the Georgia Institute of Technology. He is also an Officer in the United States Army Reserve. He is an intern at WATHI. The ideas and opinions expressed in this article are the author’s own and do not represent those of the United States Army or of the Department of Defense or WATHI.