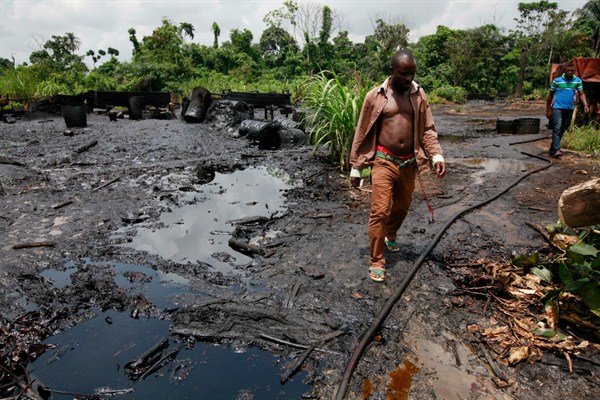 This article presents some lessons from the Niger Delta region of Nigeria. This contribution is framed within the argument that perpetual environmental abuses form chains, that strengthen if they are not addressed.  Large parts of West Africa have suffered decades of ecological damage and are now suffering the second and third order effects in the chains of climate change.

It will discuss the sustained high levels of air pollution in Port Harcourt, which emerging evidence is connecting to sixty years of mismanaged oil and gas industry activity, and the exploitation of weak national environmental regulations. The ecocide calls for national and international actors to prioritise policies that hold abusers accountable, and that break the legacy of negative environmental, social, political and economic chains of the oil and gas industry.

Pollution in the Niger Delta

The Niger Delta is one of the bluntest examples of ecocide documented worldwide. For more than sixty years, the nation’s network of oil and gas pipelines have intruded through the creeks and communities distributed from Ondo State in the western Nigeria through Cross Rivers State on the Cameroon border.

Since 1956, these have been joint owned and operated by the Nigerian National Petroleum Company (NNPC) and international oil companies like Royal Dutch Shell, Chevron Texaco, Total, Eni, and ExxonMobil. The Federal Ministry of Environment attempts to track the total extent of oil spills and gas flares, but total volumes are expected to be higher, and the complex range of impacts remain largely undocumented.

Oil spills and gas flares are of huge ecological concern, as they directly and indirectly increase depletion of mangroves. The Niger Delta is the third largest mangrove forest in the world and an area of significant biodiversity. Studies indicate that, pound for pound, mangroves can sequester four-times more carbon than rainforests can. More than 60% of the fish in the Gulf of Guinea use the roots as a breeding ground. They protect against storms and coastal erosion, and could increase resilience to more unpredictable weather in tropical areas and rising sea levels.

The socioeconomic impacts of polluted land, water and air are well documented, and include low life expectancy and wellbeing, conflict over resources, violent elections, weak governance, insecurity and instability.  But despite a wealth of evidence on causes and consequences, there is a lack of political agency to respond. For example attempts at starting a landmark clean-up and remediation of the polluted environment in Ogoni land still struggle to advance.

The World Bank reports that 94% of the population of Nigeria is exposed to air pollution that exceeds WHO guidelines, but this article focuses on the extremely high levels recorded in Port Harcourt.  Since around 2016, the effects of severe air pollution have become more obvious, particularly in Port Harcourt, the hub of the oil and gas industry. A black soot has cloaked villages, towns and cities, settling as an oily residue on every surface, permeating food/, water, lungs and stomata.

Oil spills and gas flares are of huge ecological concern, as they directly and indirectly increase depletion of mangroves

The soot is of concern because it is composed of an array of toxins harmful to health, including particulate matter (PM) 2.5, which was the fifth-leading cause of death in the world in 2015, and the larger PM 10. There is also compelling evidence that high levels of air pollution are associated with dementia, Parkinson’s disease, Alzheimer’s disease, delinquent behaviour, stunted brain development, and even increased crime in cities.

There have been some notable domestic and international write-ups, but why is this phenomenon not receiving emergency attention from those with the power to address it?  The answer why may lie in the complexity of causes and powerful interests, which are connected to chains of impacts caused by the oil and gas industry.

Due to regulatory failure, West African markets allow the sale of high sulphur and benzene content gasoline, diesel and kerosene. International commodity traders add cheap additives to boost octane and cetane levels of poor quality fuels. Researchers found that levels in fuels were deliberately matched to destination markets – and ‘West Africa spec’ is one of the dirtiest in the world.

One of the main contributors to soot is sulphur. Our forthcoming research found that fuels available in Bayelsa and Rivers states have high sulphur levels – on average 40x the Nigerian fuel standards for diesel, 2x for gasoline and 8x for kerosene. Benzene levels were so high in gasoline, almost 2,454 times the recommended occupational threshold limit.

The socioeconomic impacts of polluted land, water and air are well documented, and include low life expectancy and wellbeing, conflict over resources, violent elections, weak governance, insecurity and instability

Fuel is important to the Nigerian economy, so is heavily subsidised, and consumed in large volumes. Domestic refineries are close to non-existent, so the majority is supplied by imports. Pegged on the price of crude, the system is vulnerable to shocks, and fuel shortages are quite common. Therefore, domestic marketers, consumers and politicians are all more interested in ensuring supply, than questioning quality and level of pollutants.

The rise of the artisanal oil industry

Government and oil companies often accuse artisanal oil industry workers of being the biggest threat to environment. They refer to networks of individuals syphoning crude oil from pipelines, and refining it into diesel, gasoline and kerosene.

Our research does indicate the artisanal oil industry grew six times in size between 2012 and 2017. But the drivers of the industry’s growth are complex, and can be linked to the negative externalities of the oil and gas companies. They often boil down to a lack of alternative energy and economic opportunities for locals, which they cannot access due to political marginalisation and weak governance.

With regular fuel shortages and growing demand for fuel, the artisanal refining industry filled a gap in the market, and the process has evolved to produce larger volumes. One change was to substitute the fuel used to heat the refining pot from wood to crude oil and waste products from refining, such as bitumen increasing efficiency of refining from 45 to 88%. This made it more profitable, but increased the number of new entrants, and vastly increased the cumulative emissions of the process.

Since around 2016, the effects of severe air pollution have become more obvious, particularly in Port Harcourt, the hub of the oil and gas industry. A black soot has cloaked villages, towns and cities, settling as an oily residue on every surface, permeating food/, water, lungs and stomata

Pollution through production is the main worry of the artisanal oil industry, but ironically not the fuel produced. Lab tests show that fuel provided by these unofficial refineries in the mangrove forests has less harmful toxins than the fuel that commodity traders are importing into Nigeria.

By modelling this across Rivers and Bayelsa states, on the assumption that unofficial fuels make up 60% of consumption, unofficial fuels still contribute less pollution than official fuel. If this supply is replaced by imported fuels, it is calculated to increase particulate emissions by 20%.

For example, the government owned Port Harcourt Refining Company is old and polluting, while asphalt and bitumen plants have been shut down for their very visual contribution towards the soot epidemic. Burning vegetation to clear land and dispose of wastes highly concentrated with plastics are also likely sources.

The lack of a guiding framework for the responsible destruction of confiscated crude and fuel from the artisanal oil industry also plays a role. This was the conclusion of the committee established by the Governor of Rivers state in an unpublished report in and 2019.

But communities, actors in the artisanal oil industry and even security agencies corroborate that burning is mostly done for the media, and the majority of confiscated products are sold back or consumed by the security agencies. It is therefore safe to assume that the production process at these refineries are a more constant source of emissions than the burning by security agencies.

What can be done?

This stalemate demonstrates how vested interests can confuse where responsibility to address the negative externalities of the extractive industries lies, and how without reliable data, the sheer complexity of political ecology dynamics can prevent action.

Local media and civil society run campaigns for action led to an investigation commissioned by the Governor of Rivers state. But by blaming it on the Federal security services, the report provides a convenient escape for the Rivers state government. The Federal Government blames the soot on artisanal oil refining, justifying it’s approach to destroy the industry, without owning its responsibility to address the socio-economic causes.

Similarly, international oil companies based in Port Harcourt also blame the artisanal oil industry. But they also incorrectly claim they cause the majority of their oil spills. They too are motivated to not act, because they do not want to risk raising more attention to the negative chains linked to the international oil and gas industry.

Our analysis is based on data collected from a small sample size of fuel samples and artisanal refineries, and relies on the limited air pollution data provided by the public. Much more data is needed to inform more accurate air pollution measures and emissions modelling. This needs to be done across a range of locations to identify hotspots and the sources of the toxic pollution, and to assess the most critically exposed areas.

Collaboration between state and federal governments on responding to the artisanal oil industry is necessary, in a way that is environmentally sustainable, and addresses the lack of employment opportunities and access to energy for people across the region. International oil companies must address their legacy of climate change chains by reducing the negative externalities of their operations, that fomented the first links in the chains, and accelerated their growth.

Alexander Sewell works for Stakeholder Democracy Network (SDN), a non-governmental organisation that supports the efforts of those affected by the extractives industry and weak governance. He lives and works in Port Harcourt, Nigeria, where he is involved in research, consultation and pilot projects that demonstrate alternative policy approaches for development, security and stabilisation, especially those that address the artisanal oil industry, resource governance, environmental remediation and militancy and armed conflict.