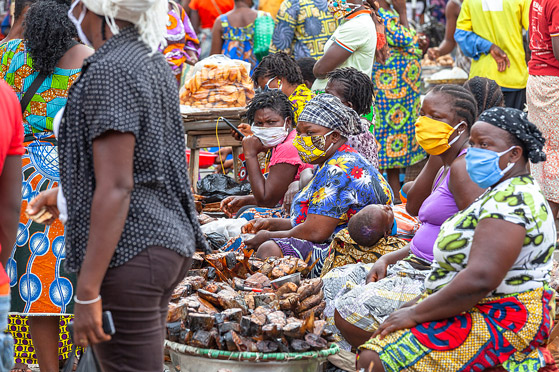 As an alternative to the confinement and closure of the airport and the international market of Dantokpa, the Government of Benin has decided to establish a simple “cordon sanitaire” around some communes while suspending public transport. The fundamental objective is to preserve the economic activity and survival of Benin’s people. If protecting human life should not be sacrificed in pursuit of profit, the response to the pandemic could cost us dearly.

Sunday, March 29, 2020. After his workout, Gaël hurried home, as he did not want to miss President Patrice Talon’s intervention on the day before the enforcement of the latest measures against Covid-19. At the end of the TV interview, he expressed a feeling of disappointment: “Instead of being convincing, the President was alarmist.” He dumped such a crucial issue in 10 minutes with no reference to figures or social support measures.” Indeed, officials from the Ministries of the Interior, Health and Communication as well as sociologists had stormed the public and private media to engage in the same path on the same Sunday.

The Head of State was at the forefront of the fight against fake news this past weekend. “If my compatriots have not yet had the opportunity to hear from me, it is because I am on the job, day and night, minute after minute … I am personally involved in every segment of the response,” said President Patrice Talon during his interview.

“So, he came out to show us he is working and that he is most affected by the situation”, commented Placide Kocou, entrepreneur. “Patrice Talon is not satisfied with a Minister’s or Chief of staff’s report. He is on top of everything. He is in two places at the same time”, said teacher James Agboli. As a result of such involvement, “the President of the Republic directly influences all decisions and can even decide alone to disregard technical advice,” said Carlos D., PhD student in sociology.

No Airport Closure and Business Activity Continues in Dantokpa

This situation is very disheartening for Ulrich, an Economics student. He believes the crisis has revealed that Beninese still do not enjoy the notable growth rate of 8% recorded by Benin compared to the other countries of the sub-region (the strongest in WAEMU ahead of Cote d’Ivoire with 7.5%, Niger with 6.3%, Senegal with 6.0%, and Togo with 5.3%): “… most of our fellow citizens are living on the previous day’s income …”, acknowledged the President of the Republic.

He added, “the measures we just prescribed, and which will be effective as of tomorrow Monday, will prevent the spread of the virus within the country, while maintaining economic activity in part of the territory”. For example, in Senegal, a response and solidarity fund and reduction of basic needs tariffs are announced.

Definitely, “economic calculations have taken precedence over objective analysis and courageous decisions to protect human life. The airport is not closed, and business activity is still running in Dantokpa. If we fail, responsiveness will cost us dearly,” said civil servant Evelyne Cossi. “The government has to rely on donations of funds, equipment and medical inputs even though we “are a great nation,” said a retired specialist in risk and disaster management.

For some politicians, “the political exploitation that is apparently taking place in this health crisis is dangerously overwhelming the decimation capacity of coronavirus”. Such a political option should be avoided at all costs to ward off the worst at the turn of the first term ‘s final year to win the vote of the Beninese people.

Florent Houessinou graduated from the University of Abomey-Calavi in Benin with a Bachelor’s degree in Philosophy and a Master’s degree in Journalism from the Higher Institute for Audiovisual Professions (ISMA) in Benin. He is the Editorial Secretary of the Catholic weekly La Croix du Bénin and Desk Manager of the same newspaper. He is currently working on a thesis project around this topic: “Journalisme et fait religieux au Bénin: vue synoptique” (Journalism and religion in Benin: a synoptic view).